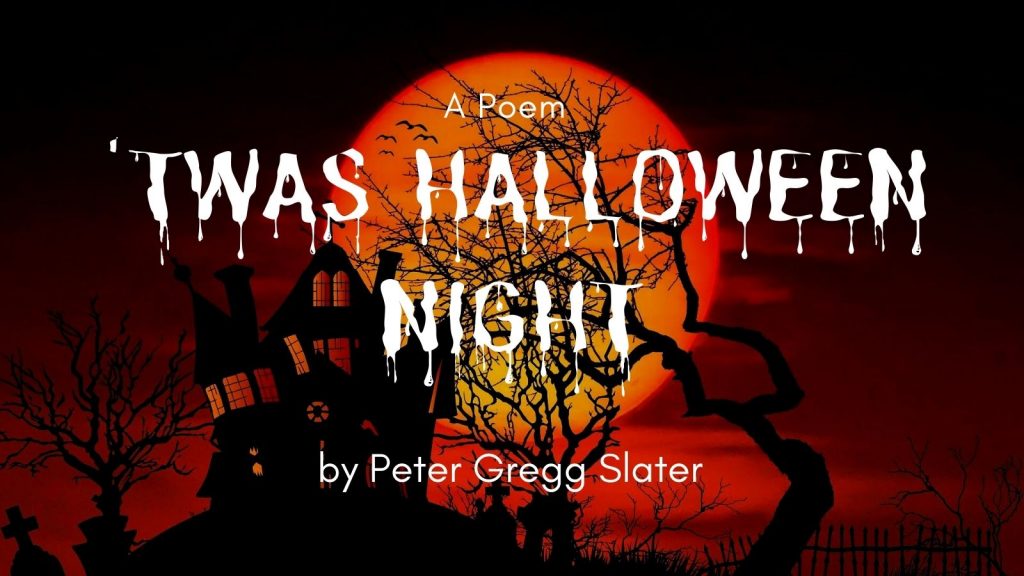 ‘Twas Halloween night, when all thro’ the house
Every creature was stirring, even grandad an old souse.
The candy bags were hung by the door with care,
In hopes that trick-or-treaters would soon be there.

The kids were all snug in their costume disguise,
While visions of Skittles danc’d in their eyes.
And Mama in J. Crew, and I in my Yankees cap
Had just settled down for a long night of door tap.

When out on the lawn there arose such a clatter,
I sprang from the La-Z-Boy to see what was the matter.
Away to the window I flew like a flash,
Tore open the shutters, and threw up the sash.

The moon on the breast of the new-fallen wet leaves,
Gave the lustre of mid-day to objects under the eaves.
When, what did my shuddering eyes sight,
But a witch squadron in V-form flight.

With a grungy crone in the lead, so twitchy and full of evil zest,
I knew in a moment it must be the Wicked Witch of the West.
More rapid than eagles her coursers they came,
And she whistled, and shouted, and call’d them by name;

As dry leaves before the wild hurricane fly,
When they meet with an obstacle, mount to the sky.
So up to the house-top the coursers they flew,
With their Swifters ashine with witches’ brew.

And then in a twinkling, I heard on the roof tile
The prancing and prowling of the witches vile.
As I drew in my head, and was turning around,
Down the chimney Witch Westy came with a bound.

She was dress’d in janky knockoffs, from her head to her foot,
And her clothes were all tarnish’d with soot.
A bundle of sacks was flung on her back,
And she look’d like a peddler just opening her pack.

Her eyes – how they glared! her warts how distasteful,
Her cheeks were like mold, her nose hateful.
Her narrow nasty mouth was drawn to a gash,
And the faint mustache on her lip as white as ash.

The stump of a stogie she held tight in her teeth,
And the smoke it encircled her head like a wreath.
She had a hatchet face, and a nose like a beak
That wobbled when she shriek’d, like a hose with a leak.

She was lean and mean, a loathsome old doxy
And I shook when I saw her like I had a poxy
A squint of her eye and a thrust of her head
Soon gave me to know I had much to dread.

She spoke not a word, but went straight to her work
And fill’d her sack from our candy stash, then turn’d with a jerk,
And drawing her finger across her throat,
And giving a snarl, up the chimney she rose with her tote.

She sprang to her Swifter, to her coven gave a whistle,
And away they all flew, like bullets from a pistol.
But I heard her holler, ere she drove out of sight-
“A miserable Halloween to all, and to all a terrible night.”

Peter Gregg Slater is a historian whose scholarship in American intellectual and cultural history is often referenced in both academic and popular publications. His poetry, fiction, parody, and essays have appeared in “Dash,” “Workers Write!,” “The Westchester Review,” “The Satirist,” and “Twentieth Century Literature,” among other publications.