You are here: Home / Archives for Poetry 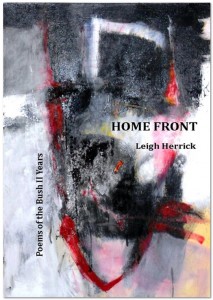 Leigh Herrick is a widely published poet, writer, and recording artist. Her poetry has won numerous awards and she is a two-time Pushcart nominee.

In HOME FRONT, Leigh Herrick’s first of two collections written during the beginning decade of the New Millennium, we are offered a landscape honed in scope and hauntingly beautiful, as the poet covers a global ground, communicating the immediacy of social and environmental concerns. Matthew Rothschild of THE PROGRESSIVE Magazine writes: “Leigh Herrick’s poems are deeply felt, tightly wrought, and morally compelling. They demand our attention.”

Largely written after the September 11, 2001, attacks in the United States, and leading up to the 2003 invasion of Iraq, Herrick’s work in HOME FRONT serves in the best tradition of engaged poetry, where is found a compendium of images and voices reflecting not just moments of personal hope and love, but those of troubled times in a troubled country, a troubled world, and on a planet in crisis. Herrick offers light footnotes and detailed end-notes for those interested in her references.

The book opens with a prosaic prologue that lends itself as introduction to the forthcoming pages. It ends with the U.S. military invasion into Iraq. Each poem is dated and the reader feels the reach across land and time as events unfold, but don’t be deceived: This book is not mere politics, or Americana. It is a journey into being as readers witness the poet’s witnessing of the world around her as she calls into question what it means to be alive and humane. An additional bonus is the few drawings included in the book from a collaboration the poet engaged in with visual artist, Branko Gulin.

Herrick’s gift is her ability to open, to lend opening to her readers, without judgment, to look critically without criticizing. Often drawing on her developed sense of linguistic rhythm, Herrick, who is also a trained hand drummer in Middle Eastern and Afro-Caribbean traditions, creates in HOME FRONT a beautiful blend of the abstract with the traditional.

FROM THE BACK COVER

“Leigh Herrick is a master of tonality and truth. Her performative power explodes from the page into full fluency of its voicing. I have seldom read work that so intrinsically honors both tradition and innovation in the art of poetry. This volume is profoundly important.” -Sheila E. Murphy.

“Leigh Herrick’s poems are smart, direct and uncompromising calls to action, to change what we do to one another and our world…. She is one hell of a writer, not afraid to experiment with you and the language both, and her meticulously crafted prose is often astonishing.” -Tom Cassidy

“One may not wish to revisit the George W. years, however this collection of work is a wide-ranging statement addressing the anger, sorrow and perplexity of what has affected us all. The variety of poetic forms and hard-hitting topics confront our individual and collective pasts…and enlightens our language of remembrance. It’s time again to realize that poetry can be relevant as is eloquently shown by Ms. Herrick.” -Scott Helmes

From THE KINDLE BOOK REVIEW TEAM (for the e-book version of HOME FRONT):

“…I am a tough reviewer. Herrick’s work is unusual; the closest I am aware of is Michael McClure: The New Book / A Book of Torture. Both sometimes format all over the place and use capitals at will. Given the enormous time gap between me now and last reading McClure, he must be a memorable author. I’m betting that, in a similar time gap, I’ll be remembering some of Herrick’s work, and I give her an additional nod for having more power in her images.

Five stars it is. For those who take the time, this work will speak to you. Highly recommended.”

LETTER FROM THE PRIMROSE PATH
Today,
I feel like nothing more
than an outrageous contradictory blank page
of prose filling nothing
with emptiness.
I will eat this for breakfast.
I will consider my arguments.
Vessel of poetry,
I offer you pigs, toast, juice,
gene-determined children,
sunrise, moons, and undetermined mornings,
while still in this old, tiresome world, soldiers march,
men, women, and children fire weapons or run
among the rubble of cities that used to be
where there are no more beds, no markets,
and where all arguments stand with their backs against remaining walls and where
all reasons for killing are upheld.
Meanwhile, Vessel,
your clever, dactylic sheep climb
over these lines like mountains.
Your bulbs break from your spring ground
time and again, red and full of vanity,
despite their would-be beauty.
Your little pigeons flock and gather up
the bouqueted niceties tied with the inoffensive lace of
silent agreement not to speak or to speak
sweet nothings and you think you are dear
as a Valentine while I push and push
and push again, while I insist you tell me
of the other side I won’t forget,
that is the unlit side, side into which you bury
your anger and your pain,
side from which is born
your anger and your pain,
side that is, when spoken, the chance in hope,
the chance in change.
But today, Vessel, my emptiness,
you have nothing to say.
It’s windy.
The sun is out.
The stores are full of daffodils and prima veras.
You didn’t sleep well last night.
Broken dreams pulled at your feet.
~~~~~~~~~~~~~~~~~~~~~~~

THE QUIET LIFE
Lately I’ve developed a taste for the quiet life. I think how we could lie and talk together through the night. –Su Tung ‘po
We could lie together head to head or
side by side and on a moonless cloudless
summer’s night watch the sky and we could tell
our stories whichever way we’d choose and I
would choose to tell you how one time all alone
I lay in a field of corn just to watch
the sudden horizontal float and green shifting
of the shimmering borealis strewn in sheets
that flew across the sky and I would only want
to leave you with the charge of such energy
as it burst – burst & flared to shift and fade &
burst & flare again in the pure silence
of a night too cool for crickets or frogs
But of course to know any of this
we would have to be together
head to head
or at least in the garden
side by side
~~~~~~~~~~~~~~~~~~~~~~~~~

ENTRY, MONDAY AFTER
9/17/01
Gray skies now.
I return to poetry
like an obelisk / a warning / a sentiment
hanging over this page like weather
all the news of storming burning my lines of sight
until I blur with the rhetoric of One
about to unfold
the umbrella policy of promise
that something
something
is about to come
is gathering itself along the horizon
is waiting in the corners of consciousness
like a nightmare
unremembered