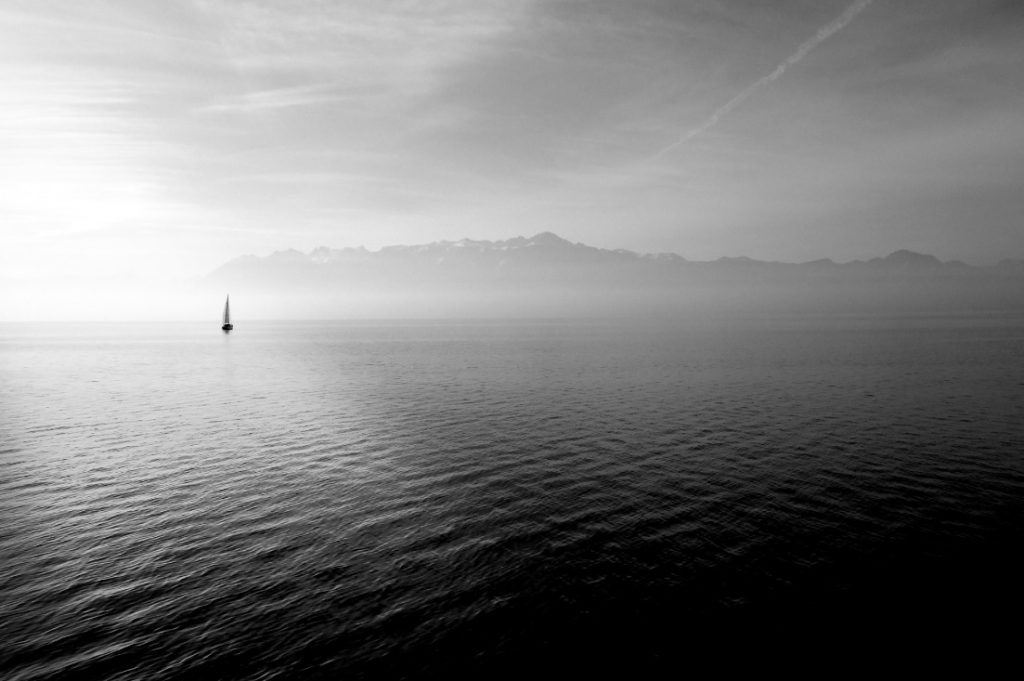 Rain in the harbor.
A fine mist falling from a high
sun streaked cloud bank, gentle rain
falling like folds being shaken from
a lacy curtain.

I hear water hissing
under car tires on Ocean Blvd.
A truck slides to a stop at the traffic signal.
Someone stands on a horn.
A siren shrills past my corner
and heads downtown. The rain picks up.
A cacophony of thunder surges toward me
from a coming black bank of clouds
at the edge of the horizon.
A storm’s coming, maybe a big one.
A sail at the mouth of the harbor,
just beyond the breakwater. I pick up
my binoculars & focus down.
Looks to be a twenty footer bobbing
in the swells. The current trying to push her into
the wall of rocks just by the lighthouse.
I make out the shape of a man dressed
out in yellow slicks.
He’s alone.
He’s hanging onto the tiller and riding his tack
for everything he’s worth.
I watch with excitement as he slides into
the mouth of the channel,
missing the grey rocks by only a boat length.
He stands up, swings the boom, his tiny craft
bucks over a wave, and changes direction.
He’s running for home.

As he gets closer to the beach,
I see his face.
He’s a man around my age.
He’s pouring something
hot from a thermos into a mug.
Smiling as if he was the luckiest guy
in the world, maybe he is.

He looks at the sky, then right up at me
and smiles. I watch him sail by pelted with rain.
What would it be like to be him.
To sail into the rain, and smile.
I’d sail to Catalina.
Sailing fish would follow my shadow,
dolphins would ride as high as my bow.

I begin to smile, too.

About this time the Harbor Patrol
siren & blue lights on, charge up next to him.
They throw a line & take him into tow.
dragging him toward the docks,
He slumps back into his seat.
Smile gone.
Civilization had him by the throat.
I sigh, stare at the bay in falling rain.
After a while. I decide to walk up the beach
in spite of the weather.
###

Steve De France is a widely published poet, playwright and essayist both in America and in Great Britain. His work has appeared in literary publications in America, England, Canada, France, Ireland, Wales, Scotland, India, Australia, and New Zealand. He has been nominated for a Pushcart Prize in Poetry in both 2002 and 2003. Recent publications include The Wallace Stevens Journal, The Mid-American Poetry Review, Ambit, Atlantic, Clean Sheets, Poetrybay, Yellow Mama and The Sun. In England he won a Reader’s Award in Orbis Magazine for his poem “Hawks.” In the United States he won the Josh Samuels’ Annual Poetry Competition (2003) for his poem: “The Man Who Loved Mermaids.” His play THE KILLER had it’s world premier at the GARAGE THEATRE in Long Beach, California (Sept-October 2006). He has received the Distinguished Alumnus Award from Chapman University for his writing. Most recently his poem “Gregor’s Wings” has been nominated for The Best of The Net by Poetic Diversity.