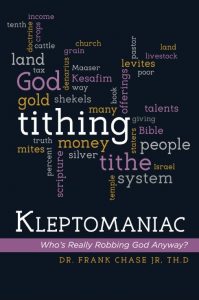 Dr. FRANK CHASE, JR., author of False Roads To Manhood, What Women Need To Know; What Men Need To Understand, and the new release, KLEPTOMANIAC: Who’s Really Robbing God Anyway? He is a native of Baltimore, Maryland. He works for the government as a senior aviation writer for the Department of the Army. He’s a four-year veteran of the US Army. Mr. Chase earned his Bachelor of Arts Degree in Communications and a minor in Sociology from Washington State University in 1989. Dr. Chase has a BA in Biblical Studies and a Master of Arts in Theology from North Carolina College of Theology (NCCT) and has earned his Doctorate in Theology from NCCT in 2009. He has authored and published numerous religious articles for newspapers, online magazines and print media. Chase is an Alabama resident and lives with his wife Teresa and their two children. Anyone who knows Frank will tell you that he has always been an analytical thinker about every aspect of life even from childhood. Frank Chase Jr. has been married for 20 years to Teresa Chase. He is a proud father of six children, and is the Grandfather of eight grandchildren.

KLEPTOMANIAC, Who’s Really Robbing God Anyway examines the pages of the Bible to uncover the untwisted truth about the centuries-old false teachings concerning tithes and offerings. Every page of this book helps the reader become an analyst in getting to the bottom line of what tithing is in the Old and New Testament. The book first defines the word tithe and then breaks down the differences between giving and tithing as the Bible instructs. The author exposes what most people believe as fact to bring them to what the Bible actually teaches when it comes to true giving. Are the arguments put forth today about tithing fact or fiction? This book tackles tough questions like, did God ever require a tithe of money? Was the contents of the tithe always money in the Bible? Did God change the tithe at some point in biblical history? Are first fruits money? Is the tithe food, money or both? Is the church the storehouse? Did Jesus, Paul and the Disciples tithe? Did the early church honor a money tithe system? Are Chri
stians really cursed for not tithing ten percent of their income? These questions will be answered based on scholarship, the land, the language and the literature of the original Biblical people. Not only will questions be answered for those confused about whether or not they are required to pay ten percent of their income to any religious institution, they will learn what the Bible really teaches about money and stewardship. The author meticulously examines the word tithe in both the Hebrew and Greek language. To understand every Bible verse that contains the word tithe, the author gives context and definitive definitions for clarity of the text. This book also explains the concept of giving from a New Testament perspective without the mandate of ten percent and explains why the Apostle Paul never mentioned tithing to any of the New Testament congregations. This book is about how to properly interpret biblical terms to arrive at the proper interpretation of a biblical text that refers to money or tithing.

The words, The Truth Will Set You Free, proclaimed by Christ centuries ago changed my life forever in unimaginable ways. What I painfully know is this: searching for and discovering truth can separate people, destroy friendships, and throw unsuspecting believers into exile from institutional Christianity.

The truth that set me free is what I learned about a century’s old teaching called tithing. My quest for truth begged for an answer to the proverbial sixty-four thousand dollar question. Does the modern day multifaceted tithing system have any resemblance to biblical tithing? The hermeneutical and exegetical answer based on the land, the language and the literature of the biblical Hebrew Israelites is no! God never issued a new commandment to convert the orthodox biblical food tithe into money as a method to support the New Testament church in age of grace. The change of economic systems across history from agricultural to monetary did not cause God to change his holy food tithe to money.

I practiced the tax-deductible greenback tithing system for 30 years. After extensive research on the subject and prayer, I discovered Christ never endorsed tithing as a command or a principal for New Testament/New Covenant believers. When I peeled back the tithing onion in biblical and secular history, shock and dismay beat upon my theological head like a 2×4. When I regained consciousness, it was apparent Christ never endorsed money tithing as many modern preachers assert. The Savior followed 613 instructions of the Law and the only authentic stipulated tithing law He endorsed was the tithe the Bible emphatically claims are eatable items such as crops, cattle, herd, flocks and sheep. In Jesus’ own words, in Matthew 23:23, he acknowledges that the Pharisees tithed mint, rue and cumin, which were eatable items and yet somehow people assume money is implied? The bottom line; tithing is not money, but food and Yahweh never commuted the food tithe to money in the 1st century nor the 21st century. Defining the authentic biblical tithe to include non-food sources is not mentioned in the Holy Scriptures. To command the tithe of money is “teaching for doctrines the commandments of men” (Matthew 15:9). Also, tithing money violates what Yeshua said, “Thus have ye made the commandment of God of none effect by your tradition” (Matt 15:6). The New Testament has no tithing commands; however, you will find much concerning abundant giving from the heart.

I knew that my decision to switch from tithing to giving from my heart carried a cataclysmic risk. Looking back at the process of what I learned about tithing, fear struck me because now I had to face reality and the truth. In many ways, I was unprepared for the consequences of what would happen to my family or me emotionally and spiritually as a result of not tithing anymore.