You are here: Home / Book Listing / The Antigone Poems 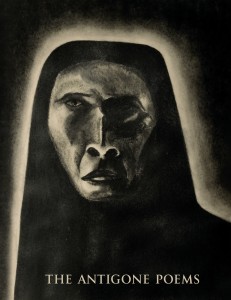 Co-founder of the original Studio Altaire in 1980s Montreal, MARIE SLAIGHT (1954-) has worked in Montreal, New Orleans, and Buenos Aires as a writer, producer, and performer for film, theatre and music. Her play, Random Shots, was produced at the Theatre Centre in Toronto. She collaborated on a series of short films with Terrence Tasker and was an actor and creative consultant for National Film Board of Canada co-productions. Her poetry has appeared in American Writing, Pittsburgh Quarterly, Poetry Salzburg, The Abiko Quarterly, New Orleans Review and elsewhere. Slaight is currently the director of Altaire Productions & Publications, a Sydney-based arts production company, which has been involved in creative consulting and co-producing for independent New Orleans music and such films as the award-winning documentary Bury the Hatchet, Kindred and Happy Baby.

TERRENCE TASKER (1947-1992) was born in Saskatchewan, Canada, the son of a lumberjack. Raised in rural western Canada, he went on to become a self-taught artist and filmmaker. He made a series of short films: Steps, The Abortion, and Echo, which screened in New York and Toronto. In 1981 he co-founded and built the original Studio Altaire, a 90-seat theater and visual art gallery that also ran after hours jazz concerts and poetry readings in downtown Montreal. He worked as a set builder for Montreal’s Centaur Theater and film such as The Resurrected and Deep Sleep, as well as working in construction, mining, finance, industrial installations, taxi driving and film projectionist. He created the artwork for The Antigone Poems in the 1970s, while living in Montreal and Toronto.

The Antigone Poems is an intensely personal invocation of the ancient Greek tragedy, created in the 1970s while writer Marie Slaight and artist Terrence Tasker were living in Montreal and Toronto. A bold retelling of the ancient tale of defiance and justice, its poetry and images capture the anguish of the original tale in an unembellished modernized rendition.

The Antigone Poems was described by Grace Cavalieri in Washington Independent Review of Books as: “…the most strangely beautiful book to come across this desk in a long time. First, it’s always interesting to have a publisher print a work 40 years after it’s written without disclosing why. All that we know is that the writer and artist lived in Montreal and Toronto in the 1970’s. I guess Tasker’s death in 1992 has something to do with this premiere. First we should know something about Antigone in literature. Well it’s an ancient Greek tragedy where Antigone, the female protagonist, is ultimately jailed and sentenced to death, and all you need to know is that everyone—all the principles— die in the end, except for the prison guards. I’m not being flippant, but truthfully, to read these poems, that’s all you need to know.

And I ADORE these weird little poems. They are surreal and wild. The charcoal drawings are terrifyingly brilliant. They scare the bejesus out of you and you can’t stop turning the pages. It’s like bingeing on BREAKING BAD and WAKING THE DEAD both at once. I deem this a holy book—written in ecstasy and the madness of genius and I hope it’s reprinted and lasts forever. The poems are untitled. Check this out:

We live our lives
The instant between life and death
To touch death always,
That is the sun.
This copy I hold in my hand—no one will ever get from me. This is ART you cannot buy or sell. It is the flaming center of the volcano that makes us create.”
The Antigone Poems provides a special expedition into the depths of the ancient Sophocles tragedy while questioning power, punishment and one of mythology’s oldest themes: rebellion.

Rising black…
Scarlet airs
Begging laughter.
When I am used
Then
The innate language.
Potency.
The potency is shattering.
Only the night
Holds jasmine.
Where is my tongue?
If this perfume doesn’t burst
It will twist into venom.