You are here: Home / Book Listing / Having and Keeping 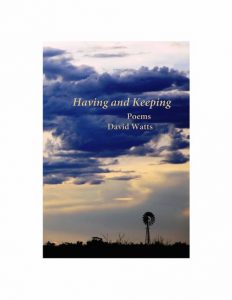 Having and Keeping is the seventh book of David’s poems to be published. The manuscript was requested by Brick Road Poetry Press following their annual contest. David has also published two collections of short stories, Bedside Manners from Harmony/Random House and The Orange Wire Problem from U. Iowa Press. He has also published two novels, a mystery and a western and has authored several essays.

Having and Keeping is the work of an accomplished poet collecting and revising for more than a decade. These poems, inspired by the landscape of the Southwest United States and by human interactions that astonish and entertain have initiated this spontaneous poetic response. The poems have been etched out in a distinct poetic voice that has, over the years, become very comfortable and is both probing and graceful. The voice has been influenced by poets such as Jack Gilbert, Jennifer K. Sweeney and Molly Bashaw. Several of the poems have won awards or have been published in respected literary journals.

The journey this book takes ushers the reader through the various and varied pages of a life: interactions between father and son over life choices, the hesitations of love, the teen-age betrayal that remains in the consciousness forever, the death of loved ones, divorce, and finally, a prescription for happiness in the midst of turmoil.

The unintended subtext of the book is a deliberate exploration into the mechanisms and quirkiness of memory in preserving for us the events of our lives. In this analysis, the distinction between having something and being able to keep it is elegantly revealed. Without slipping into academic tones, the book takes on a philosophical turn, laying in its observations not like mathematical deductions but as revelations earned by careful reflection.

The experience thus encountered by a careful reader is that which crosses many lines of thought but always reduces what is observed into a compressed, elegant language that is both lyrical and effortless.

My father is made
of dust and intelligence.
He holds the barn together
with road signs:
Grapette, Lucky Strike,
Burma Shave,
rusty foundlings
cobbling slats together
like stitches in a fence.
He preaches Jesus.
He whistles Turkey in the Straw.
Mother is made from music
and culture. She bakes
bread. Opens her tilted uterus
for two sons.
She plays Five Foot Two
on the ukulele.
She is a long way from Laredo.
They made me
out of farming and music,
embryo
with two lines tangled,
hatched like a confounded
chicken
with a tune in its head.
So it happens the barn hums
old melodies,
names, and notes.
And the cotton rows get counted
as beats in a measure,
like Mozart,
while the combine whistles
a shed full of arias.
My father shows me harrow,
windmill, horse trough.
Already he knows my world
is different.
He knows inheritance
is like jumping through smoke.
He listens for what I hear.
The forest hums.
Even the Johnson Grass squeaks
as it grows.
The Delicate Sprigs of Love
He is sitting next to her.
The firmness of her thigh is pressed against his.
There is no light between them.
He listens so heavily
into the heartbeat of her that he hears the murmuring
of aspens on the hillside.
He tells her this.
How could he sit next to her if he didn’t
tell her this?
She is beautiful
in the manner in which there is so much beauty
it almost cancels itself.
I can lie down
in the golden shape of your shadow, he says,
and no longer question myself.
She wonders
if they were just prisoners of the freedom
that brought them there.
Or if to love him
would mean waiting for promises, lying awake,
in the draft of crossing stars.
They kiss
and though he is still alone in the fear that no one will ever kiss him
he is sitting next to her.
Broken Jar
The heart wanders
then it questions itself.
Pleasure, then the horror
of guns and tanks in Syria.
We’d rather ghazals
in moonlight. The turn of a face
as she disappears around
the corner. The desire for peace
while war runs its poison
alongside. Each morsel
of tranquility more precious
as memory chimes in
with hot Louisiana days,
lemonade, and mother
at the piano. I’d like to think
what memory wants us
to think, sitting securely
on its fence post
lifting particles of light
from the broken jar.
But the world is beyond us
even as we live inside it—
The sun comes and goes.
The moon breathes and circles us
with reflected light,
while the soul holds the body
carefully in its arms
as we walk through the perforated dark.
Words
My father used few words.
He moved fearless
from task to task as if
they were meals to be eaten.
Our house grew inglenooks
from the imagination of the carpenter
he became.
From tree limbs of summer
I watched him tote
and saw, driving nails
with the same muscles
that lost baseballs
over West Texas outfields.
Leaves turned.
Snow fell.
All that whiteness
came. Standing
in the emptiness of transition
he spoke
imploring wisdom.
Then, when the inkwell went dry
he reached with great and somber hands
to turn out the light.