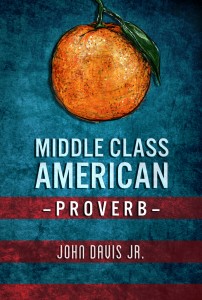 John Davis Jr. is a Florida poet and educator. His work has appeared in literary journals internationally, with recent appearances in Nashville Review (Vanderbilt University) and Steel Toe Review. He holds an MFA from University of Tampa, and has been nominated for the Pushcart Prize. His chapbook of poems about fatherhood and mentorship, The Boys of Men, was published earlier this year by Kelsay Books of California.

Middle Class American Proverb is a collection of poems about life in the most traditional part of the Sunshine State, its heart. As a sixth-generation Floridian from a pioneer family, John Davis Jr. uses the history, people, and places of central Florida to reveal a slice of life there. Among these poems about life on a citrus farm are other narrative and image-rich pieces dealing with topics as diverse as living with Epilepsy, working for a small-town newspaper, and even losing a child. Called “a fabulous debut…not to be missed” by Erica Dawson, winner of the 2006 Anthony Hecht Prize in Poetry, Middle Class American proverb crosses boundaries of form and style, and rings with the universality of Robert Frost, among other influences.

The Meaning of Wauchula
“Buzzards’ Roost,” the old-timers muttered,
recalling the sun-trodden cowhands before them:
Hearty Hardee County folk who knew
too well those pasture scavengers’
oily black feathers, scale-crusted skulls –
turkey vultures awaited free carcasses
from dead-limbed, dirty-mossed vantage points.
“Ibises’ Flight,” the scoutmaster explained,
pointing to a Seminole dictionary:
Rhythmic shushes of white tapered wings unified
in the Audubon beauty of postcard Florida –
slender-sleek, sickle-beaked graceful birds
crossing, caressing an orange-dusk horizon.
In the end, it became what we made it:
A brittle death-and-desertion existence,
or accumulated desires flying onward –
the nightmarish scrape of cold beaks on bones,
or the light, smooth sound of our dreams’ ascent.
Broken History
Our farmhouse’s thick crystal doorknobs
captured the light of a sepia age handled
by forefathers’ soil-worked palms,
mothers’ pricked fingertips.
A tentative turner, uncertain of things
fine and fragile, in childhood I tested
each slow and spectral rotation, rounding
hallway sunlight in antique hours’ glass.
The day I broke one off, I cried
as color and sparkle trickled
out, leaving a hard and lifeless chunk
reflecting my hand, magnifying my crime.
No tape, no glue would ever bring it back:
A relic relegated to the dark
drawer of a mahogany box:
our tabled sewing machine.
Old Florida Upstairs
Life in a lowdown flat land means
there’s nowhere to go but up.
Our attics store the rising heat
and just-in-case leftovers:
Hurricane season’s window boards,
former follies and fascinations –
avarice’s aftermath among
rat poisons and pointed rafters.
Now and then, a sin-curious child
will trespass, take a wrong step, crash
through the drop-ceiling panels, hang
on to hot and splintery cross beams
while beneath, guilty legs and feet flail
into calm, conditioned air of futility
pouring from pure white vents connected
to silver, filth-laden passageways –
ductwork overhead whispering nothings’
assurances: Everything is fine, fine, fine…
Hanging Sheets at her Late Parents’ Place
She likes their smell, she says:
king-sized unfitted linens dried
in farm fashion – clothesline, sun.
At her childhood home where no one lives,
she still takes in the everyday mail, dusts
the crystal, checks the ice bin.
Half an hour northwest, her grown-up house
clicks and hums its modern sounds –
static in her southeastern absence.
Light wind ripples her bone-colored bedclothes,
waving them like farewell handkerchiefs
or white flags of final surrender.
The Left Farm
There’s a lot he misses these days:
That view from the barntop
as color warms into the crops,
the hanging diesel smoke cranked
from an elderly red tractor,
a low, humming groan at the pump
where the well sends strong-smelling
sulfur water through irrigation
lines, down rows of emerald,
and past a lone, age-painted
farmhouse: sitting, waiting
for his return, his touch
inherited and learned from proud
generations of ancestors.
His blood and hands and head
ache for the land, the tasks before:
before this time and state,
before the man who toils
without tilling for a living.
There’s a lot he misses these days.