You are here: Home / Book Listing / Polio to Paratrooper 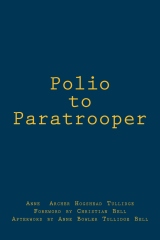 Anne Archer Hogshead Tullidge is the primary author of Polio to Paratrooper. She is George Tullidge’s mama. Mrs. Tullidge is the mother of four children, and devoted most of her life in service of others. In 1989 she was awarded the “Decoration of Distinguished Civilian Award.” That day he cited her personal commitment, deep concern, and unselfish devotion to the United States Military, for printing and distributing over 300,000 booklets during 50 years. Mrs. Tullidge passed away in 1995.

Anne Tullidge Bell is Mrs. Tullidge last living child. She is George’s baby sister, though neither never met as she was born two years after his death. Mrs. Bell is a retired elementary school teacher.

Christian Bell is a grandson of Mrs. Tullidge.

George Bowler Tullidge III was an ordinary “All-American” boy who chose to serve his country. He volunteered for the infantry, was assigned to the 507th PIR, 2nd Battalion, Company G in the 82nd Airborne (fittingly known as the “All Americans”) after completing jump school. George jumped in the early morning hours of June 6th as part of Operation Overlord. George was soon to find himself engaged in battle with German forces around the La Fier Bridge near St. Mere Eglise, France. During the fighting, George was wounded; however, he refused to leave his position as it was critical to success of the mission. His wound, while certainly not life threatening with today’s medical technology, took his life a few days later.

“…Displaying aggressiveness and unusual courage, Sergeant Tullidge set up a light machine gun and held off the enemy attacks, killing and wounding many of the enemy and causing others to withdraw. Although wounded in the engagement, he refused to withdraw until the enemy had been completely routed from the area….”

This is his story, a boy from a small town in Virginia, who overcame polio, excelled as a swimmer and answered the call to serve his country. Much of the story is told through letters George exchanged with his mama and family. After George’s passing, there were many letters from those who knew him as well, this completed a story of a man who touched many lives and gave his to cause of freedom.

Among George’s possessions that fateful day in France was a booklet his mama had given to him. In that booklet were words of encouragement that she had borrowed from many sources including the Bible. After George’s death, his mama published that booklet as “A Paratrooper’s Faith”. She devotedly distributed the book to all who asked, including our Armed Forces. This booklet is still being published today, by George’s sister and distributed to all who ask free of charge.

The proceeds from the sale of Polio to Paratrooper will be donated to organizations that support our armed forces.

Lieutenant Bast, who was an assistant coach in swimming, had tried to interest George in going to the University of Virginia. He had mentioned the possibility of his getting a scholarship. The idea of being able to assist his daddy in this way appealed strongly to George. Although he had been working faithfully on his lessons all year, he put forth an even greater effort to make at least eighty percent average. The idea of George’s attending a large university was not very pleasing to us. He had been so shielded and protected always, and we could not bear the thought of his being entirely on his own amid such temptations as are so evident in schools of this type. We tried not to discourage George’s enthusiasm, because it was so admirable for him to want to earn a scholarship. We talked the matter of George’s going to University of Virginia with Major Brice, his English teacher, whom he admired and really loved. Major Brice complimented George highly and said we could trust him anywhere, he thought. Temptations are everywhere, and the boy has to decide himself which road he will follow. Our one desire was to select the right place for building George’s Christian character. As swimming was such a helpful, healthful, stabilizing force in his life, we felt that he should go where he would have an opportunity and an incentive to swim. We prayed a great deal over the selection, and were certain of God’s direction in the final choice.

Finally we narrowed the choice to two—V. M. I and V.P.I. George visited both and decided that he wished to attend the latter. In spite of George’s great desire to obtain a scholarship, we told him positively that we wanted a military school.

George’s interest and activity in the Young People’s department continued through all of his high school years. He was faithful in attendance, and often led the worship program. He frequently went with the group to the Western State insane asylum to try to brighten these saddened lives with a religious program.

Saturday, May 31, arrived and was indeed a glorious occasion. We were notified that George had successfully passed all his work and would receive his diploma on Tuesday. Gin was to arrive from Richmond to attend the informal dance with George that night. For days great preparations had been made by the boys. At George’s insistence, Tommy and Arch had carefully straightened their rooms so that they would appear spotless to our guest. Early that morning George had driven the boys to Seven Springs to remain till the bus Sunday morning. He could not have them in his way when Gin came. Brothers the ages of George’s could be and most often were exceedingly annoying. Tommy loves to tease, so he was especially unwanted. Having a girl in the house was such a novelty to us all, and the younger boys could not be cast aside if they were in the house. George’s inspiration to take them ten miles away made the atmosphere more pleasant and much less nerve-racking.