You are here: Home / Book Listing / Starved For Bullets: A Collection of Scars

Starved For Bullets: A Collection of Scars 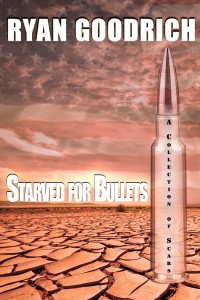 Ryan Goodrich is a medically retired U.S. Marine who lives a quiet life with his wife, son, and two dogs in Oregon. He is currently a successful Information Technology Manager, which reflects his many years as an Aviation Communications Technician while serving in the Marine Corps. Ryan holds a B.A. in English and a fire for the written word. His experiences in the military have taken him to more than twenty different countries around the world, where he has seen the best and worst of everything that makes us human. The good and bad have both shaped his harsh and passionate style, but the memories are more vivid than words will ever be able to express. It is his hope that fellow veterans and civilians alike will be able to understand and embrace what it means to serve one’s country and appreciate all that is so easily lost or forgotten. It is his goal to be a voice for veterans everywhere and provide a unique look into what makes a warrior tick.

When he’s done building Lego towers with his son, Ryan spends most of his evenings burning the candlelight with a good book, typing away at his computer, or watching a good flick with his wife. He also dabbles in remote-controlled helicopters and likes pencil sketching.

Sgt. Ryan Goodrich’s experiences, spanning more than twenty countries and ten years of service, have provided him the opportunity to see the world through a different glass and write a book that reveals a small, but truly gripping piece of the war in Iraq and Afghanistan on multiple fronts. With raw power, political controversy, and unsettling brutality, this collection of scars is sure to leave the average reader irreversibly shaken.

Pulling readers beyond their comfort zones and into the darkest corners of modern warfare, Sgt. Goodrich asks us to look at the unspeakable truths of the battlefield, cultural differences, religion, and the shaky hand that is American politics through unflinching eyes as reality spews from the pages. Fifty mesmerizing poems recount the struggles military members endure when death stares them in the face and what happens when red lines fade into the darkness of the desert. Interwoven with inflexible truths and grotesquely beautiful imagery, these poems will resonate long after the final bullet is spent.

Starved For Bullets: A Collection of Scars is about understanding the true foundations that America was built upon and how it has slowly gone astray. It’s about remembering those who gave the ultimate sacrifice and the ones who lived to tell their stories. It’s about dealing with the losing comrades, family, and loved-ones and the differences that both separate and unite us all. It may shock and place a bitter taste in your mouth at times, but the goal is to open eyes and make a statement so that future generations can benefit from their fathers’ mistakes and victories in the best possible way. It’s about you and I and everyone in-between. It’s the journey we all endure and it should never be squandered or forgotten.

From a U.S. Marine’s beginnings, to treacherous battlefronts, and the inevitable return to reality, these poems seek to embrace the warrior ethos and shatter the media-driven mindset that has veiled the public eye for far too long. There is a shard of truth within everything that passes before one’s eyes, but some bullets refuse to be dismissed so easily. May these bullets reveal what you have chosen to conceal.

Nothing had a vision, where something could breathe…

And it all began in a fire-dance display, which injected the void with a recipe for destruction and riddled the ages with somber twilight…

They feed off the young and multiply into greater swelling collections of ice, sailing lights and molten beads of rejection, raping their neighbors with collisions in the night, where criminal slights do pass, bringing in the dawn of silent distractions, forcing the birth of the infantile crusade, it will spawn in the distance with its mother, naturally budding in the heat of delusion.

This breeds the generations of cloned constraints, babbling as the flippancy of oceans and streams, where it sculpts the surface of perfection with brittle blades…

Hiding in the shadows of corpulent satisfaction, arced high throughout the withering landscapes, they settled on a clump of iron and steel, contemplating their resources for life, like the clay-pigeon souls they stockpiled for slaves…

Instead, they fashioned a legion of hellish dogs quite attuned to shredding clay like water balloons, but such creatures knew the evils of gods and turned rabid on their makers, to save what clay was left with thought.

These nightmares resembled the others, created likenesses ranked among shadows of men…

How to Earn Your Skin

It all began in the womb where the father echoed his violence in passion to his son, counting the days he would march on into sunset. In the darkness of slumber and growth he fashioned weapons to defend the ages, where, soon, they would bring in the waves of his name on their lips. He would thirst after the scent of splattered lives and cry out for another round in the blur of clashing titans, so their mark would bleed on in spaces where few would journey beyond the stars.

Once the son hungered for the open seas, he would find his way into the world and leave the confining shadows of existence. No mother to hold his hand, for the art of devastating movements was to fill his lungs and slip with the streams of his veins. He was beaten into the corners of rat-infested chambers and stripped of his skin to extract the weakness that huddled within and out of sight.

They placed a mirror before his naked mess and he looked on into the eyes of a stranger. A man behind the glass held a fresh pair of skins in his palm and dangled the issue beyond the reach of pain. The boy’s eyes glistened and strained under the weight of a great tsunami, but the reflection gave him strength. He could imagine being whole again and wrapped in the armor of silk that would surely absorb the coming rains of fire.

So he extended his arm to accept the offer…

Then the man launched the skins across the valley, slapped a rifle in the lad’s hand and chuckled as he spoke,

Starved For Bullets: A Collection of Scars