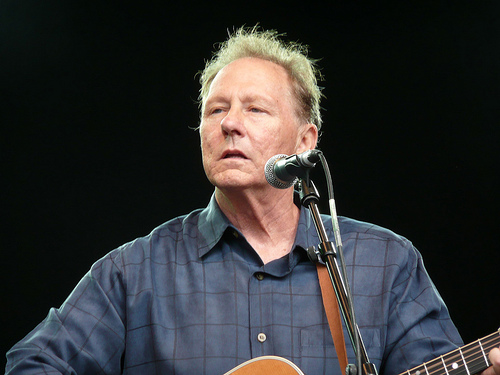 The stars held still in their places.
Below them, the majestic earth
Rolled easy through the night,
Moving with purpose but in no hurry.

On the ground, there were
Lilacs and Poinsettias.
There were spaces between
​Comfortable​, strong-limbed trees.

And in those spaces, endless
Opportunities for joy and well-being pulsed,
Chances to dance; chances to smile,
Happy life waiting to bloom and stretch
And reach out beyond itself.

Between the Earth and stars,
He scowled at his watch,
Slammed his tray table up
And thought he might be
Catching a goddamn cold
About five seconds before
The plane began to crash.

Singer/songwriter, poet, novelist and playwright Bob Lind helped shape and define the 1960s Folk Rock movement. His lyrics have been taught in colleges and universities throughout the U.S. and Canada, and translated into nine languages.

His poetry has appeared in Poet’s Haven and other journals. His poem, “Watching My Girlfriend and her Coworkers Bowling for Charity,” was published in THE IODINE POETRY JOURNAL (15th Anniversary Edition).

He wrote the critically acclaimed novel EAST OF THE HOLYLAND.

In 2013, Bob joined Dan Fogelberg, John Denver and other music legends, being inducted into THE COLORADO MUSIC HALL OF FAME along with Judy Collins.