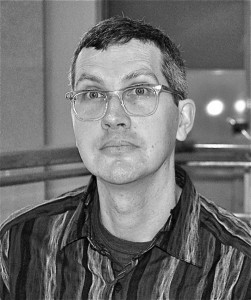 Mouse, you are not your hallowed body.

Spectacular, the pale glory of flight, sublimely alone.
One sharp cry above the May iris, or by winter,
over branching pipes of naked wood.

Your shape caught, sympathetic, by the hawk’s seeking claw.

Posthumous:
metamorphosis complete,
after the awe of the yellow-black beak.

Andrew Demcak is an award-winning poet and novelist whose work has been widely published and anthologized both in print and on-line, and whose books have been featured at Verse Daily, The Lambda Literary Foundation, The Best American Poetry blog, and Oranges & Sardines. His fourth book of poetry, Night Chant, was published by Lethe Press, 2011 and nominated by the publisher for both the 2012 Lambda Literary Award and the Thom Gunn Poetry Award. His other poetry books are: A Single Hurt Color, GOSS 183::Casa Menendez Press, 2010, Zero Summer, BlazeVOX [Books], NY, 2009 and his first poetry book, Catching Tigers in Red Weather, three candles press, 2007, that was selected by Joan Larkin to win the Three Candles Press Open Book Award. His work has been nominated for the Pushcart Prize, Lambda Award, Thom Gunn Poetry Award, both the California and Northern California Book Awards, Best of the Web, and others. He has an M. F. A. in English/Creative Writing from St. Mary’s College in Moraga, CA , where he studied with Robert Hass, Brenda Hillman, Michael Palmer, Carol Snow, Frank Bidart, Gary Snyder, Charles Wright, and Sharon Olds. Andrew is also a member of the Squaw Valley Community of Writers, where he studied with Galway Kinnell, Richard Howard, and Lucille Clifton. His poems, including Young Man With iPod (Poetry Midwest, #13), are taught at Ohio State University as part of both its English 110.02 class, “The Genius and the Madman,” and in its “American Poetry Since 1945” class. At the age of 23, Andrew published his first chapbook, The Psalms (Big 23 Press), which was favorably reviewed by Dr. Clifton Snider in the Small Press Review (issue 226, vol. 23, no. 11.) When he is not hard at work as a Children’s Librarian for Oakland Public Library, he can be found eating okonomiyaki at Japantown in San Francisco. Viva Wallace Stevens! Visit Andrew at: AndrewDemcak.com