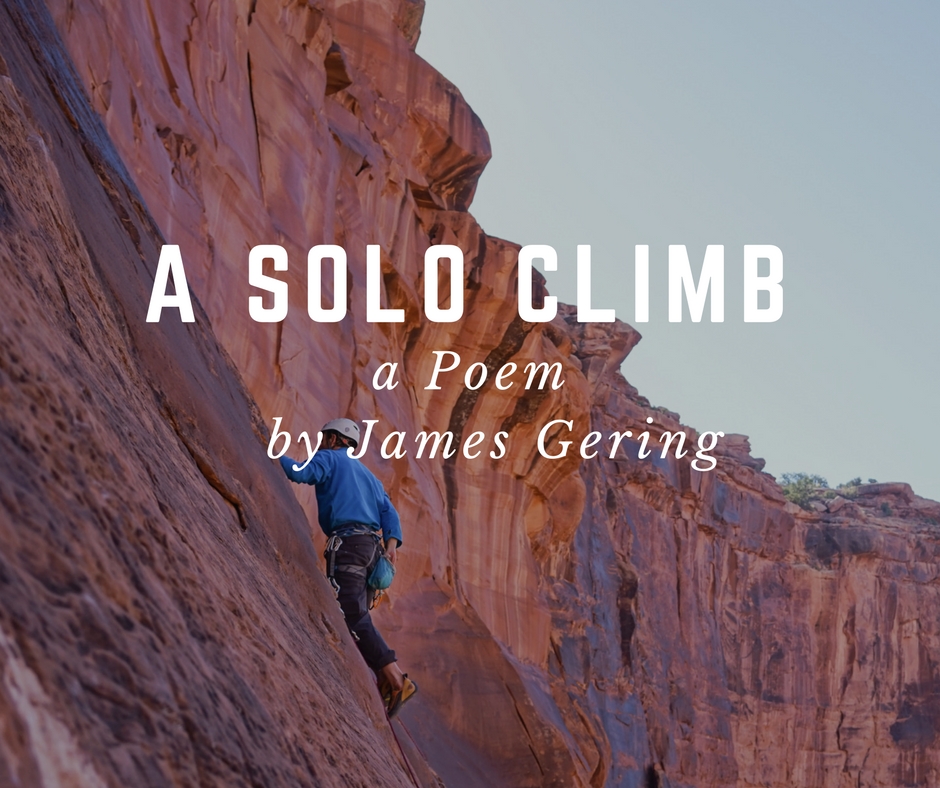 If Aaron falls from the low crux,
he breaks a leg, but higher will have
the reapers exulting.
He cruises passes the crux,
traverses diagonally up the rock,
commits to the steep arête.

Josie, watching from the base,
asks her bloke one last time to accept
a safety rope, like a sane climber.
But why, he muses – the sandstone
is caressing his fingers,
his head is in the zone.

Nearing the summit,
Aaron stretches for a pivotal hold,
but misses by a fingernail.
He backs off and rests by alternating his feet
on a hold the size of a domino.

A dreaded tremor starts up in one leg
and the reapers get word.
They rock up, whooping,
pile out of their hearse and undertake
to cajole Aaron into their car.

Last time Aaron had reached the summit
of a solo climb, the dog had slunk off,
the endorphins shimmied and he’d hoped
for sky-drenched love with Josie,
but she recoiled and gave him the ultimatum.

Sweat now beads his temples.
The reapers lick the soles of his Sportivas
and flirt with his fingertips.
The trees on the ground appear tiny,
Josie too, arms folded, not looking.

Now his hands and feet work
in concert through the final moves.
The reapers, jeering, pile back
into their vehicle and drive away.

Aaron lies on the rocky platform
at the top, open to heaven,
waiting for celestial bands to play,
dancers to sashay in.
Nothing.

He moves to the edge and scans
the drop. No Josie at the bottom.
Then Aaron sees her:
soloing the pathway out.

I have been an avid writer of short stories and poems for many years. In 2005, I completed an MA in fiction with honours at Macquarie University, Sydney.
A number of my stories and poems have won awards and been published in Australia and overseas.

Reading and writing poetry and fiction is my lifeblood.

When not writing poems and stories or reading those of other writers, I teach English at The University of Sydney, enjoy the company of my two boys, and the natural wonders of the Blue Mountains near Sydney.