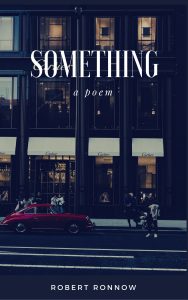 Something created. Does the creator think ahead
or spill a storm. Rain happens. We supply the
reasons. Evaporation of water collecting over
huge expanses, condensed and pushed as clouds
over the land. We say it makes us sad or depressed.
We want to cry.

You describe the America you know and if you
are ashamed of yourself for what you see, you lie.
Or don’t look. Loud noises of automobiles and
fumes. Today in Riverside Park, leaning on a rail,
the dead leaves and snow reminded me how far
from nature and life I am. The snow blew
in from the west. People passed in a smooth
slow line in front of me. Dogs trailing one
another. People hiding until crises bring them
out. Their dog smells another dog between the legs.
The master runs over to stop him. Maybe he
thinks they’re going to fight. Doesn’t want his
big German shepherd to hurt her dachshund.

Guy runs past in gray sweats on his tip-toes.
Glances at me. Another passes in blue sweats. Looks
longer. They think I’m a mugger. They are not
sexually attracted. I’m an opponent. I want something
they have. I look surly. Why aren’t I out
running, disciplining myself, making myself healthy,
doing something. What brings you out here. You’re not
doing anything but watching us and staring at the ground.

Walking down Broadway I realized I’ve never lived here and still don’t. Two women
window shopping is strange to me. They talk about the clothes. They are friends. I slow down, I
don’t feel so cold. Stroll, looking at people is like a sunny day and it’s a carnival. Streets
different in different weather. Rainy nights are good. Cold rainy nights. Bars filled and warm.
Streets empty and cold. People pass and look as members of a fraternity. They need someone and
don’t hide it. They will try anyone out for one night. They have tea together. They go for a drink
in some neutral place. They go straight to bed in the dark. They can’t see the face.