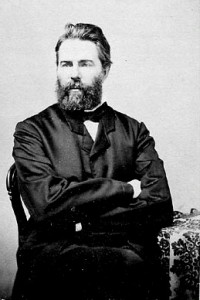 The Charles-and-Emma seaward sped,
(Named from the carven pair at prow,)
He so smart, and a curly head,
She tricked forth as a bride knows how:
Pretty stem for the port, I trow!

But iron-rust and alum-spray
And chafing gear, and sun and dew
Vexed this lad and lassie gay,
Tears in their eyes, salt tears nor few;
And the hug relaxed with the failing glue.

But came in end a dismal night,
With creaking beams and ribs that groan,
A black lee-shore and waters white:
Dropped on the reef, the pair lie prone:
O, the breakers dance, but the winds they
moan!