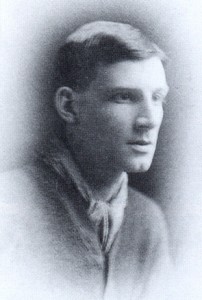 “Jack fell as he’d have wished,” the Mother said,
And folded up the letter that she’d read.
“The Colonel writes so nicely.” Something broke
In the tired voice that quavered to a choke.
She half looked up. “We mothers are so proud
Of our dead soldiers.” Then her face was bowed.
Quietly the Brother Officer went out.
He’d told the poor old dear some gallant lies
That she would nourish all her days, no doubt.
For while he coughed and mumbled, her weak eyes
Had shone with gentle triumph, brimmed with joy,
Because he’d been so brave, her glorious boy.
He thought how “Jack,” cold-footed, useless swine,
Had panicked down the trench that night the mine
Went up at Wicked Corner; how he’d tried
To get sent home; and how, at last, he died,
Blown to small bits. And no one seemed to care
Except that lonely woman with white hair.