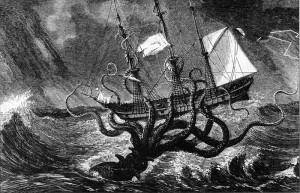 The Kraken
by Lord Alfred Tennyson

Below the thunders of the upper deep,
Far, far beneath in the abysmal sea,
His ancient, dreamless, uninvaded sleep
The Kraken sleepeth: faintest sunlights flee
About his shadowy sides; above him swell
Huge sponges of millennial growth and height;
And far away into the sickly light,
From many a wondrous and secret cell
Unnumber’d and enormous polypi
Winnow with giant arms the lumbering green.
There hath he lain for ages, and will lie
Battening upon huge sea-worms in his sleep,
Until the latter fire shall heat the deep;
Then once by man and angels to be seen,
In roaring he shall rise and on the surface die.