You are here: Home / Book Listing / A Measure of the Soul 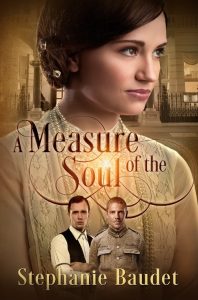 Stephanie Baudet lives in Buckinghamshire, England. She is the author of over forty published books for children. This is her first novel for adults.

Stephanie has been a writing tutor for over ten years for two writing schools and as written a book entitled ‘Writing for Children: A Step-by-Step Guide.’

This story was conventionally published some years ago as an historical novel but readers seemed to feel that the hinted romantic element should be developed. I have rewritten the book and done this.

For Harriet Baker, looking after her ailing father is a distressing burden, but after his death she is faced with more problems. It is 1918, and when her brother, Alex, goes missing while on compassionate leave, she is forced to hide him, fearing the extreme penalty awarded to deserters. But suffering from shell-shock, his mental state is precarious, and when he is seen by others, she is forced to yield to blackmail.

This is not the time to fall in love, and can she trust Doctor Ken Winterton? Dare she confide in him? Where do his loyalties lie?

Harriet picked up the newspaper from the hall floor and glanced at the front page. August the first. Who would believe that it was four years, almost to the day, since this terrible war had started? So much had happened, not only in the world in general, but to their family. If only it were possible to turn back the clock.

Four years ago her brother, Alex, had been a newly-qualified doctor looking forward to a career in medicine like his father. Four years ago their father had not been diagnosed. Now he was dying slowly, and she wouldn’t wish that on anyone: that waiting for death that crept up so insidiously and inevitably.

She could hear him behind her, his footsteps feather-light; his once heavy frame that had bounded down the stairs was now ponderous and unsteady like a young child’s. This morning, though, she detected something that could hardly be called a spring in his step but which surely denoted a good day. She’d learnt to gauge his health by the minutest signs; they were far more telling than his answers to the question. But that was Father, and she knew that she herself would probably be the same in these circumstances. God forbid that ever would be, though she knew that there was a strong possibility. However, she wouldn’t dwell on that point.

She walked to the doorway of the surgery and stared into the room as if preoccupied with her plans for the day, tying her apron strings. She relived, as she did most mornings now, those days gone by, but nothing could bring them back. She’d been restless then, straining at her woman’s bonds, antagonistic, wanting her freedom. Now she wished with all her heart that she could go back to that peaceful time.

She felt a hand on her shoulder.

‘Good morning, Harriet.’ His voice was quieter than it used to be too. No, not quieter; he had always had a soft voice with more than a hint of his native Scottish, but it was weak now and had a slight quiver in it that had certainly never been there before.

She turned to face him and smiled and kissed the gaunt cheek, feeling the hollowness beneath her lips. She no longer had to reach up to kiss him; he was stooped and grey and had aged ten years in the last twelve months.

‘How are you, Father?’ she asked, as always trying to put an optimistic edge to her voice.

There was a fractional hesitation before he answered. ‘Not too bad. I had quite a good sleep. Only the thirst woke me up as usual, but I’ve come to a decision, Harriet. I’ll tell you at breakfast. Open up the surgery first.’