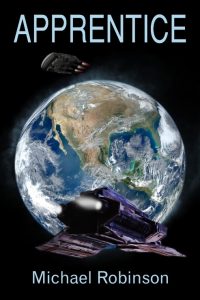 Michael Robinson currently works as a programmer by day and writes sci-fi by night. Since a young age he dreamed of writing science fiction and exploring the depths of space and time in his imagination, to export the ideas in his head into a solid format. He felt there were stories in his head that needed to be told and worked hard from the age of fifteen to make that a reality. He is also completely obsessed with time travel, and has never regretted making it the subject of his novels. Despite having little support or formal education in writing, he wrote and rewrote Apprentice until it became something almost unrecognisable from the original, with believable and deep characters, an ambitious plot and an exploration of what time travel really could mean and how it should be used, as well as other advanced technologies. He also wants to develop the complex, often confusing relationships and stories that only time travel will allow, in a format that means anyone can pick them up, while making his fictional universe as consistent and realistic as possible.

He hopes to take up writing full-time, but regardless will use any chance to keep writing, having many plans in place for future works, both fiction and non-fiction. Until he can write full-time he will continue to create software by day, and looks forward to using his experience with technology in his novels.

Apprentice introduces you to the invisible war- the endless, hidden conflict between those who protect time from tampering by time travellers and those who seek to change events to suit their own goals.

In Apprentice, a young physics student named April meets a mysterious man named Mark on a plane journey. When the plane is attacked with advanced technology, he uses his own to help her escape. Thereafter it’s them against a conspiracy of alien time travellers and their human collaborators. They must investigate an infiltration of the FBI to uncover their intentions and save the human race, enlisting their own help from agents dedicated to keeping their organisation from serving those who seek the destruction of everything they’ve sworn to protect.

But soon they discover that the enemy they thought they were facing is not what it appears to be, and they find themselves up against someone far deadlier and more familiar than they imagined.

They must use all the many tools at their disposal, and find all the allies that are willing to help in order to get the upper hand on an enemy that seemingly anticipates their every move. For all the tools of the time travellers’ trade, their most potent weapon is us, and both sides must find their own allies and use them to defeat the other. And when they find the enemy they seek, to end the threat April must leave the comfort of our world and journey to a place she knows nothing about, and expose herself to a conflict that is very different from anything she understands.

From Nazi-occupied Poland to a time when life on Earth is unrecognisable; from here on Earth to a place distant in more ways than space and time, Apprentice takes you on an adventure and never forgets to ask questions.

Like, how does time travel really work? Why aren’t time travellers among us now? How does religion fit into a four-dimensional universe? Should time travel technology be restricted, or even banned? And what place could it have in future conflicts?

In the end, of course, April must answer the question that matters the most to her: in such a universe, can she become who she needs to be to defend her planet, and take her place as a soldier in the invisible war?

April sat in her seat uneasily. She had boarded the plane alone, and wasn’t entirely comfortable with how things were working out. Her parents were supposed to join her at the airport but were told the day before that there had been a mix-up and they wouldn’t be able to board the flight the following day. They were given a refund and planned on getting on the next flight, but it meant she would have to fly alone, which she’d never done before. In fact, she’d only ever been out of England a few times. Still, that was what she had to do. April had to get out of her aisle seat to let in a man who thanked her and sat in the seat next to her as the other passengers bustled around to get settled in. Since that was one of the seats her parents would have occupied, April realised he must have been a late booker. She fastened her seatbelt and got her book out -a collection of the works of Werner Heisenberg- and started reading to keep her mind occupied. As the plane taxied towards the runway, the man next to her noticed her book and commented, “Heisenberg. You’re interested in physics?”

April looked at him and he gave a friendly smile as she replied, “Yeah, I’m studying it at university.” She took a closer look at him. She couldn’t tell his age, somewhere between twenty and thirty-five. He wore a black t-shirt and jeans, and overall he was unremarkable in appearance. He was somewhat attractive and had intelligent eyes, but his accent was unidentifiable. She guessed he did a lot of travelling.

The plane was gearing up to take off as she asked, “How about you? What do you do?”

The man considered the question for a moment before answering. “You could call me a private investigator. I can’t talk about it though.” April’s interest was piqued, but before she could ask any more, he asked, “What are you travelling for?”

“I’m going to visit my grandparents. They live in Boston.”

The plane was about to take off, so to try to distract herself from the queasiness she always got, she asked him, “Where do you live?”

“I actually move around a lot. You?”

“Birmingham,” she responded, growing more fascinated with this stranger as she spoke with him. He was managing to avoid directly answering her questions while asking plenty of his own. As if to demonstrate it, he asked, “So why are you interested in physics?”

The plane had taken off at this point, so she was able to relax a little and answered, “Science fiction got me interested in it. From a young age I got interested in all the really strange stuff that goes on at the quantum level, so that’s all I’ve ever wanted to do. I already know most of what I’ve been learning.” The man smiled at this but said nothing.