You are here: Home / Book Listing / Children of the Mechanism by Jeffrey Aaron Miller

Children of the Mechanism 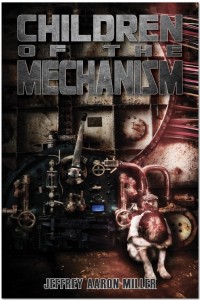 Jeffrey Miller is a graduate of the Creative Writing program at the University of Arkansas. He has held a ludicrous number of jobs over the years across a broad spectrum of industries, from social worker to postal carrier, from tire salesman to bus driver. Through it all, he has remained a storyteller, preferring the genres of science fiction and fantasy. He resides in Northwest Arkansas with his wife and family.

In the bowels of a massive and mysterious factory, slaves live and work under the watch of cruel robots. The nature and purpose of their work is unknown to them, but their lives are short, harsh and brutal. And then one day a glitch in the system causes doors to open, and some of the slaves escape into the corridors. Through a series of harrowing escapes and terrifying struggles, they make their way into the heart of the factory, where the truth of their world is finally revealed.

Kuo sank his hands into the meat trough and scooped up a large mound of the damp, gray paste. He brought it up to the lid of the trough and dumped it into the plastic bucket on the floor between his feet. Some of it slopped onto the floor, but Kuo was careful to pick up every little bit and flick it into the bucket. The grease ran between his fingers and dripped onto his feet, tickling his toes. When the bucket was full, he grabbed the rope handle in both hands, set his feet farther apart, and rose. The bucket was heavy, but Kuo was strong. The only risk was losing his balance.

Kuo turned, saw the line of feeders moving across the room, saw the Watchers beyond them with their mouthless faces and bent arms. Oh, the Watchers were always nearby, weren’t they? Always staring, staring, staring, and sometimes Kuo thought he knew what they were thinking. They looked past the other feeders and fixed their black eyes on Kuo alone.

“I know what you’re doing,” Kuo muttered. “I can read your minds. I know you’re playing the game with me.”

He glared at them to make sure they got the point. Then Kuo turned toward the Grong. It filled most of the large room, the vast heap of it rising up to the ceiling a hundred feet above. A monstrous mound of flesh piled up in mottled folds like numerous fat bellies, it had no arms or legs, no head or neck or hair, just fat and meat and quivering pale skin. The feeders approaching the bottom looked like ants. All along the surface, the folds of the Grong hung heavy, as if the whole thing were slowly melting into the floor.

Kuo moved to the back of the line of feeders and shuffled forward, clutching his bucket between his knees. The metal floor transitioned to the soft padding that served as a kind of permanent bed for the Grong. It had a bit of give to it, and Kuo sighed. He liked how the soft floor felt beneath his feet.

A face peeked out of the line ahead of him. Big brown eyes, a curly lock of black hair, a small and crooked mouth that was smiling, as always.

The feeder in front of him spun around and made a shushing noise. Kuo scowled at the man until he turned away. He might have punched him right in his face, but a Watcher moved up beside him.

“No shouting during the working day,” it said. “Loud noises lead to punishment. Work quietly. Work diligently. Keep your voice down.”

Children of the Mechanism