You are here: Home / Book Listing / Jassik Creed & The Mermaids of Emerald Lagoon 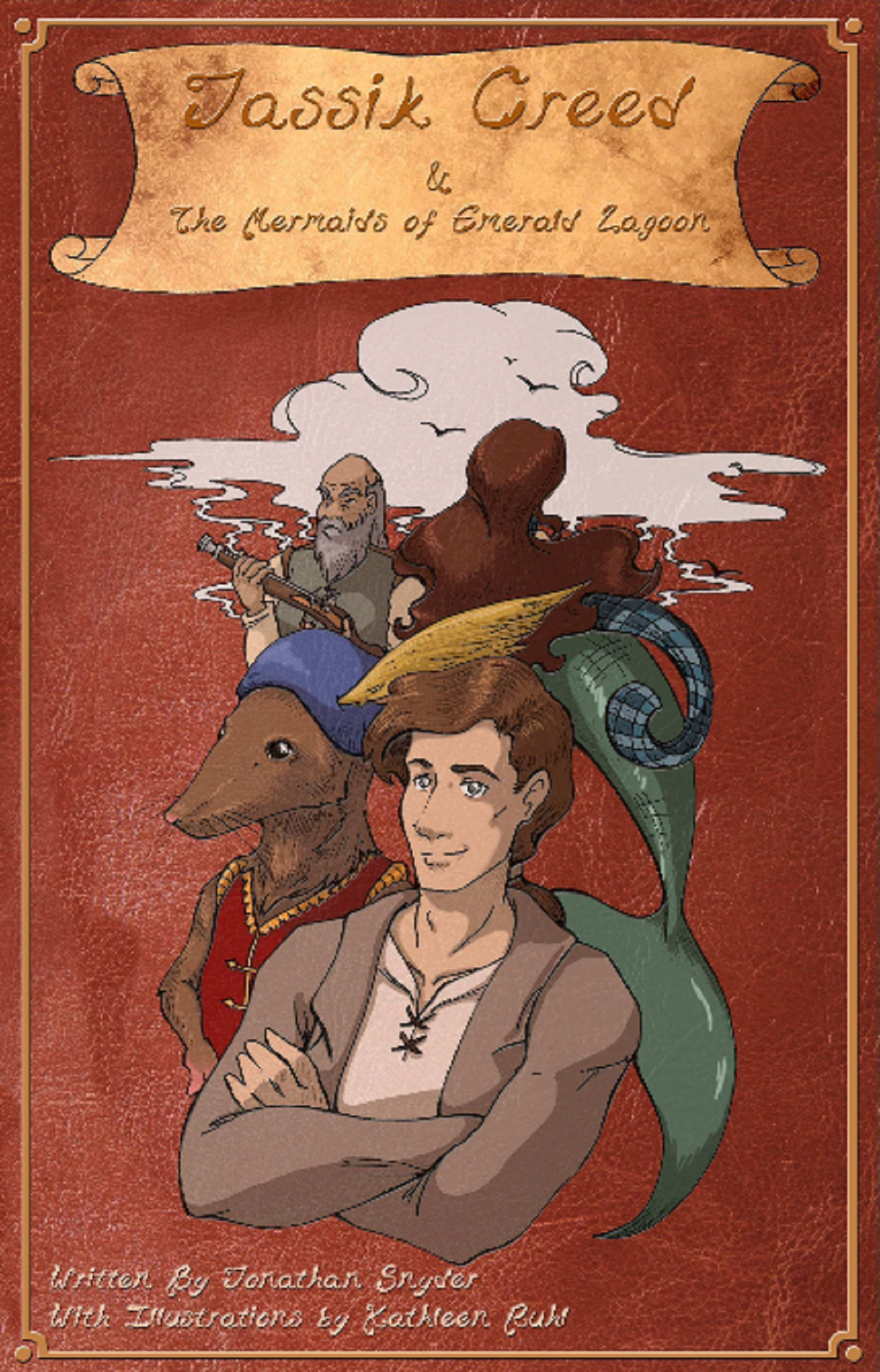 Jonathan Snyder is a author and freelancer writer who has been threatened by his muse anytime he goes astray. Absolutely in love with Science Fiction and Fantasy, he furiously writes stories to satisfy that writing urge and to keep his muse at bay. He is happily married to his artist wife Susanna and has 2 adorable children.

Treasure, mermaids, and a grumpy dwarf; it was not anything that anyone was expecting. Jassik Creed and his pal Rattuk Mulchberry had been on a quest to find the legendary sword of Skarr Razorbeard when they stumbled upon the three mermaids. The adventure became a mission to save these three unlucky mermaids while avoiding the Royal Sheriff who is out to arrest Jassik if he can. Having been falsely accused of a crime, both Jassik and Rattuk have done everything they can to keep out of the long arm of the King of Goldmyst Isle. The Sheriff Tullam is a tough man and not one easily fooled.

There is more than meets the eye as they try to find a way to accomplish their goals while staying one step ahead of their adversary. There is a rumor around the mountains that they are exploring of a monster from Rovania’s ancient times. A monster that has hunted and killed adventurers who had come across it. Was there any truth to it or was it a legend that came about the dangers and perils of being near such a mountain. Only time will tell if the two will discover the truth of the caves and the Sword of Skarr Razorbeard.

Jassik and Rattuk will find out as their adventure takes them deep into the caves of Skarr mountains to the little village of Pumpkin Spice. Arrows, monsters, and high adventure await the duo as they explore the land of Rovania. Will Jassik be able to find the sword and save the mermaids or will he be finally captured or worse. There is no telling what type of mess the two could wind up getting into.

Come along for the high adventure and exciting challenges in the first installment of the Jassik Creed series. A fun fantasy for all ages where adventure and wonder surround the heroes and their lives. There is an adventure out there, and both Jassik and Rattuk will find it and face it as a team. Grab your sword, hat and get ready for the Mermaids of Emerald Lagoon.

The sun showed down brightly upon the old Wiggen’s road, baking the windswept path that once had been a fine path. It had now started to be reclaimed by the forest that hugged its edges threatening to consume it completely. The breeze moved along briskly, carrying the smell of honey blossom and mint while dark furred bees danced among the colorful flowers that stretched into the deep woods.

The only other sound on that forgotten road was the happy crunching of dirt under the boots of two adventurers who were making their way towards the nearest town. The first, Jassik Creed, wore a loose white shirt and brown leather pants. A long gray highway coat with deep pockets covered the shirt and pants and a black leather belt was strapped around his waist. It beautiful saber with an exquisite handle that glimmered in the heat of the sun.

The other was Rattuk Mulchberry, he was the most serious of the two. He was a rat that stood as tall as Jassik’s knees. He wore a red velvet vest with gold trimming and a magnificent sword at his side which spoke of his past wealth in the land of Rodencha. Rattuk spent much of the walk trying to get his beret to stay straight, but the wind merrily kept shifting it on his head. The Rodenchan finally gave up with a sigh.

“I still think Pine Hollow was still a great diversion,” Jassik said with a grin on his face. “Those ruins were quite fascinating.”

“Until those skeletons attacked. That’s when it lost its charm for me,” Rattuk answered giving his hat one more adjustment in vain. “Not only that, we had to run into Sheriff Tullam right as we were escaping that cursed place.”

“Yes, that was a bit exciting,” Jassik said remembering the few arrows that came a bit too close.

“We still could head east toward the Stone Talon Mountains. We could find some treasure or a band of explorers looking for a good hand at the blade,” Rattuk suggested.

“Hmmm, that’s an idea.”
The two walked in silence for a bit more thinking about their choices when they came to a halt at a crossroad. In the center of the branching paths, an old wooden post with two signs stood. The golden letters had faded from years of weather and time, but they could still make out the words.

The Rodenchan shook his head emphatically.

“That city is a ghost town, supposedly cursed. Remember the last time we went into one of those?”

“Oh, that’s right,” Jassik answered rubbing his left arm. The bruise still had yet to fade.

“What’s the other road?” Rattuk asked trying to make out the words on the second sign.

“Pumpkin Spice…wait, isn’t there something about that town?” Jassik thought scratching his head.

Rattuk looked at the sign, half hoping it would speak to him, but it was his human compatriot that remembered.

“Yes. Skarr Razorbeard used to raid and pillage around Pumpkin Spice three hundred years ago. There’s a legend that says that he made a glorious sword out of the best
materials he could steal.”

“It was also his downfall,” Rattuk warned.

“How about we head that direction. At least it’s not cursed.”

With a spring in their step, the two adventurers turned down the road heading to the west on their way to Pumpkin Spice.