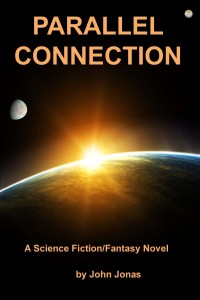 After serving in the US Navy, I became a computer technician and lived the single life in San Antonio in 1980. (I was born here) 34 years later and a little wiser (I hope) I decided to try writing as a hobby. This being my first book, I found it somewhat difficult to learn the ins and outs of ebooks. The hardest part is promoting it, writing it was FUN.

Two similar planets, a trillion miles separating them, both in extreme danger of destruction, saved from annihilation by one man. A story of interstellar intrigue and mystery involving one man forced to overcome ever changing obstacles.

While investigating a missing persons report, a Detective finds evidence that a plot is underway using an extremely dangerous substance; and as he discovers almost too late, the plan is already in motion to destroy another planet that he has a connection to. While he is saving one, his own planet has cut off all communications and the Detective is left wondering how he will get back home.

As space rocks go, this particular one is much larger than the ones that usually hit the Earth’s atmosphere and turn into shooting stars, or meteors. The ones that survive the fiery plunge through the planet’s air supply, depending on its size, can either put on an impressive light show but cause little damage or create havoc on its way down with shock waves and sonic booms culminating in an impact crater that changes the landscape for centuries.

On 15 February 2013, an asteroid entered Earth’s atmosphere over Chelyabinsk, Russia with an estimated speed of over 41,000 mph, almost 60 times the speed of sound at that altitude. The dazzling light of the meteor was brighter than the sun, and bright enough to cast moving shadows during the morning in Chelyabinsk. It was observed over a wide area of the region and in neighboring republics. Eyewitnesses also felt intense heat from the fireball. Due to its enormous velocity and shallow atmospheric entry angle, the object exploded in an air burst over Chelyabinsk at a height of about 76,000 feet. The explosion generated a bright flash, producing many small fragmentary meteorites and a powerful shock wave. The atmosphere absorbed most of the object’s energy in an explosion equivalent to approximately 440 kilotons of TNT, 20–30 times more energy than was released from the atomic bomb detonated at Hiroshima.

The object was undetected before its atmospheric entry and its explosion created considerable confusion among local residents. About 1,500 people were injured seriously enough to seek medical treatment. All of the injuries were due to indirect effects rather than the meteor itself, mainly from broken glass from windows that were blown in when the shock wave arrived, minutes after the flash. More than 7,000 buildings in six cities across the region were damaged by the explosion’s shock wave.With an estimated initial mass of about 11,000 tons and measuring between 55 and 65 feet in diameter, it shattered into many small pieces and did not cause any damage due to impact.

Eighteen years later, another undetected asteroid about twice the size of the Chelyabinsk one entered the atmosphere over Yellowknife, Northwest Territories, Canada. Located on the northern shore of Great Slave Lake and about 250 miles south of the Arctic Circle, Yellowknife had a population of approximately 20,000 before the disaster. The November, 2031 meteor didn’t shatter into thousands of pieces, instead impacting south of the city near the shore of Great Slave Lake and killed almost 4,000 of its residents. The U.S. Geological survey measured the energy at a 9.2 on the Richter scale and the crater it created can be seen from any of the orbiting space stations above North America. It created a dust cloud in the atmosphere that lasted for 2 years. The shock wave destroyed the city and the Canadian government decided to move the survivors to other cities and not rebuild.

The disaster prompted NASA and the Jet Propulsion Laboratory to reactivate an experimental program to detect incoming asteroids that was shut down in 2010. The NEOWISE program, Near Earth Object Wide-field Infrared Survey Explorer, is still plagued with problems due to its advanced age and the need for cryogens to cool the telescope.

This unnamed rock, roughly round in shape and 55 miles in diameter, is a C-type asteroid and is traveling at about 200,000 miles per hour toward the Earth’s sun. C-type asteroids are carbonaceous asteroids. They are the most common variety, forming around 75% of known asteroids, but this one has a moderately strong ultraviolet absorption rate due to its composition, which makes it harder to detect from great distances.

Created by an interplanetary collision many thousands of years ago, it is presently hurtling through space 2 billion miles from the sun, having recently passed the orbit of Neptune. The distance between Neptune and Earth varies but averages out to be about 3,500 million miles, and at 200,000 miles per hour, the asteroid should be in Earth’s “vicinity” in less than 2 years. There is one tiny problem with that itinerary: Jupiter is in the way.

With the sun being at the center of the solar system it consists of 8 planets and their natural satellites, 5 dwarf planets, the asteroid belt, comets and other stellar objects (including those in the trans-Neptunian belt). With the exception of Pluto, all 8 planets (and most dwarf planets) are known to revolve around the sun in a semi-circular orbit and in a near flat trajectory along the elliptical plane. Although all of them are rotating around the same sun, they are not all lined up in a row like people waiting their turn for a carnival ride. In order to calculate where a planet will be at any given time, scientists use things like celestial mechanics and Kepler’s equation to estimate where it will be in relation to Earth. When this asteroid reaches Jupiter’s orbital path, the gas giant will be in its path and should collide with the 5th planet in the solar system. With Jupiter being the largest planet in Earth’s solar system, two and a half times more massive than all the others combined, and having a diameter that is 11.2 times that of Earth, it’s not a hard target to hit. Having a mass that is 317.8 times that of Earth and big enough to hold roughly 1,300 Earths, its gravitational pull is felt across the 8 planets and even the sun.

At its current speed, the asteroid should crash into it in approximately 14 months. If it is discovered by anyone on Earth before that, it will mostly be ignored because it will be approaching Jupiter on the back side and astronomers and space watchers are more interested in observing the spectacular impacts when they occur on the Earth side of it. At the moment, though, no one is aware of this massive 55 mile wide boulder speeding through space; it has gone undetected so far.

Undetected by no one on Earth, that is.