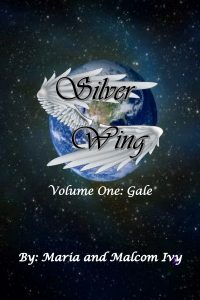 Malcom and Maria Ivy are a husband and wife team who wanted to fulfill their childhood dreams. Malcom had a story, and Maria had the words to bring it to life. Maria Ivy lived in Naperville, IL, for most of her life. She attended North Central College where she received her Bachelors in Writing with a minor in Music. While in school, she interned at Minerva Rising, a literary journal that publishes poetry and short stories exclusively by women, and studied abroad at Canterbury Christ Church University in Canterbury, England. She currently works full time while writing the sequel to this first novella. This is her first full length story, as she previously specialized in poetry and spoken word. Malcom also holds a degree from North Central College (Bachelors in Business Management) and works fulltime in sales in Nashville, TN. He grew up in Chicago, IL, then spent his high school years in Atlanta before going back to IL for college. Malcom was a Division III basketball player and is somewhat fluent in Japanese. As a senior in college, Malcom studied a full-term at Nagoya Gakuin University in Nagoya, Japan. They are the parents of two wonderful boys, Jeremiah and Isaiah, and now live in Middle Tennessee. This is their first joint venture, and they look forward to all the sequels ahead.

Silver Wing, Volume One: Gale is the first in a line of novellas following Antoine Silver, a black high-school senior who ends up in the wrong place at the wrong time and is gifted with superpowers. Crafted as if it were a comic book, the series starts by focusing on this single character and expanding the universe as the story progresses. Antoine’s father died in the line of duty when he was a child. Antoine had always planned to follow in his father’s footsteps by living heroically, but he had no idea that he would gifted with the opportunity to become an actual superhero. He has to learn how to control his new powers and is given multiple opportunities to make the choice between using those powers for good or evil. As with most superheroes, Antoine has an inherent desire to do good, but is unsure of the best ways to do so. In this first novel he is forced to deal with the loss of multiple family members, making new friends, and his desire to prove to himself and his family that he is capable of great things. The Silver Wing book saga not only focuses on Antoine as he grows into himself and his powers but also on his best friend and sidekick Alex. Alex is the son of a billionaire and is a technological genius despite only being seventeen years old. The dynamic between the two boys opens up a realm of discussion on the differences between social classes, race relations, and systemic corruption. This first book serves the reader with many of these ideas subtly but future sequels will address these very real concepts in ways that mirror today’s relevant social issues. Silver Wing, Volume One: Gale is a dynamic, unique take on the superhero novel that strives to bring diversity to a genre that has been criticized for its lack of people of color in prominent roles. Over time, the authors hope that the series will open a candid discussion on representation in young adult literature.

The book is set to release on February 10th, 2017 on the author’s website, silverwingbook.com.

Antoine had no idea he was so close to death. Even after his skateboard slammed into the ground and he was flung through the air by the massive fireball splitting the concrete walls of the warehouse and engulfing the surrounding environment, he thought he might be okay (in excruciating pain yes, but okay). As the fire wrapped around his body, he started to worry. The barren ground wasn’t nearly as soft as it should have been; it should have been grass. Grass would have been nice; grass doesn’t give you a concussion; grass doesn’t leave you helpless before impending doom.

He lifted his head and saw the black of his bedroom ceiling, chuckled, and dropped his head back down to his pillow, but it wasn’t his pillow. It was still the ground.

“Ughhhh!” Antoine groaned as he struggled to stand up into the thick black cloud of smoke swirling a few inches above his face. He thought he should wait for his vision to adjust to the smoke, but the smoke failed to clear. As he began to stand, he saw the metal nuts and bolts that used to hold his skateboard together melting into the lifeless ground. He had a sudden horrible thought.

I can’t feel my skin. It should be covered in third degree burns, but… His hands didn’t crackle or bleed as he flexed his fingers. His pants, shirt, and boxers were nearly gone and his shoe soles were scorched and disintegrating, but his skin was… normal.

He was ready to wake up. Antoine wondered how his aunt would interpret this one, this dream about being impervious to fire but left naked on the street. He pinched himself. No, this really wasn’t a dream.

The smoke around him slowly dissipated. When enough had cleared to allow him to grasp a few short breaths, he let out a muffled snicker.

Despite the smoke clearing (somewhat), he was still miles from home and close to naked. Antoine peered up where the flaming upper floors of the warehouse should have been, but saw only smoke and sky. Whatever had blown the place up had done a damn good job of it. He knew the logical plan was to get checked out by the paramedics and let them escort him to a hospital. Anyone at his proximity to the blast would have some serious injuries.

Antoine knew he didn’t. Plus, medical bills would only have troubled his Aunt Rose. The smoke had now fully cleared allowing Antoine to finally take a full, deep breath and gather the strength to jog home. It was almost 11:30 p.m. when Antoine slipped through the side door of the garage and into the small kitchen.

Hallelujah for out of town work training. Antoine had forgotten that his aunt would be at a nursing conference all weekend. He silently lifted a prayer to the scheduling gods.

As much as Aunt Rose preferred being home to make sure he got his homework done, tonight’s vaporized clothing and late arrival would have caused her fits.