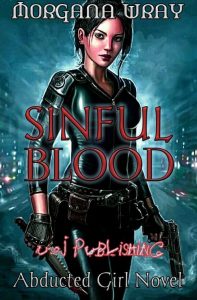 An author with an amazing sense of humor. I kind of infuse my work with some dark humor and fantastical musings. I hold a degree in sciences and I mostly write urban fantasy and paranormal stuff.

Yesterday, I was just the average teenage girl-oblivious to everything that lurked in the dark. Seduced by the devilishly handsome looks of a stranger, I abandoned all caution to chase him into the night.

I must admit he did look pretty hot in just a pair of jeans. His shaggy hair and his mysterious, deep gaze were all it took to disarm caution. I wanted to be his. I wanted to be possessed by him.

I was hot on his sexy heels, chasing after him like a girl possessed. But now, I am not certain if I am the one stalking him or if he is the one stalking me. His allure has invaded my senses and I find myself powerless to resist.

I should be terrified of what could happen if this chase goes south, but hey you only live once-right?

I was cold, and trembling. The bed felt like a rough log. All the bumps poked at my skin, and once again I was covered in bruises. Lazily, I dragged myself out of bed to tend to the rattling window.

“Silly old shaky thing!” I blurted out some mutterings, feeling rather peeved that I had to lose out on some cherished sleep.

I still remembered the party I had snuck out to attend last night-even though the whole event felt like one big haze. The alcoholic stuff I and my small circle of friends had mixed together must have given me a bigger knock than I thought.

Raising my arm up to my face, I could make out a nasty discoloration underneath one of my arms. I think I must have bruised my arm at the party, somehow. It was a stupid thing to have done-I knew that, but girls my age always often did silly, little things like that. I was meant to slam the window shut, but something very distracting made me freeze in my tracks.

“Mmm.. Very scrummy,” I muttered a bit, wearing a stupid, sheepish look on my face.

The boy that had caught my eyes was bending over to pick something up. The lights reflecting from the glass bottle that was snugly resting in his coarse hand flashed in my face. I squeezed my eyes shut, and withdrew hastily from the rebounding beam of light.

Usually, that would have been a buzz kill, but there aren’t many boys with a face like something that was pulled out of a glamour magazine living here in Little Basford. Nope, all the boys my age either had too many freckles, were overweight from all the extra greasy portions, or were simply not that into girls. The most good looking ones often turned out to be gay caterpillars that would never morph into something different.

Scruffy hair, well toned muscles and a tight arse-hidden underneath stone grey jeans trousers-that was what my senses of vision were assaulted with. I wished I had X-ray vision for obvious reasons that I’d rather not say. My mind could be a gutter, bubbling away with the most sensual and riveting things, sometimes.

I thought I saw the scruffy-haired boy curse out loud. He looked rather upset. His eyes were fixated on the pavement. I could only assume he had spilt his booze on the floor. There was a drain pipe next to my window. It made a good anchor to rest my limbs on whenever I had to evade the grownups keen eyes.

I was perched on the pipes, near the living room when I heard hushed exchanges between mommy and dad. There seemed to be some tension between the two of them. This was quite normal to me, as everything was an excuse for some good, old fashioned bickering. Sometimes, I wondered why they ever got together in the first place.

“Do you think Juniper has snuck out again?”

“She is unusually quiet up there. Usually, she blasts one of her vulgar songs on the loud speaker before falling to sleep. I think she is up to something, Derrick,” Mommy nagged at dad.

“She wouldn’t dare do that. Not after the epic tell off that she got from yours truly.” Dad chuckled dismissively. “Go to sleep woman and stop fretting! You are always fretting about nothing!”

I remembered that tell off. It was not pleasant or funny. Dad took my phone off me and confiscated my precious novels. He was a big meanie. I was left in my room without any of the things that I enjoyed for a whole week. It was like being in solitary confinement with only the voices in your head to keep you company. I was at the brink of becoming insane, but somehow I survived. Stewing in my own thoughts turned out not to be so bad.

I pushed that festering thought to the back of my mind and shifted my thoughts to something more appealing. Something like the handsome stranger that I had just feasted my eyes on.

“Steady yourself, Juniper. You can totally do this. You’ve climbed this pipe lots of times,” I whispered reassuringly to myself, as I tried to calm my flustered heart.

I was already half way down when I lost my footing and tumbled down. Luckily, there was a soft patch of soil beneath me to cushion my fall. I did not break anything important. My night clothes were mucky though. It would hardly make a good first impression to a boy I was so keen to chat up. Surely, I would miss his good graces by several miles if I went after him now.

I thought about climbing back up into my room, but my heart was thumping way too fast to give that line of thought any credence. I just let the idea of walking away float away from my mind. I had made a rock solid resolve not to abandon trying to get the handsome stranger’s attention.