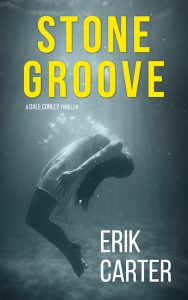 Erik Carter writes thrillers and mysteries. A trained public historian and design professional, his adventures have led him across America, where he has done everything from hosting a television show to shooting documentaries in the desert to teaching college. These experiences gave the background he needs for his greatest adventure—writing fiction.

An empty crime scene. A blood-spattered stone. And a 400-year-old mystery.

Federal Agent Dale Conley specializes in the unusual, and he’s seen it all. Except for this. An entire community has vanished overnight. One hundred forty-seven people. The only clue is the word ROANOKE chiseled into a blood-spattered stone.

Dale knows that in the 1930s a series of stones was discovered—stones with carved messages that allegedly told the fate of the Roanoke Colony. When Dale finds more stones with cryptic messages, it’s clear he has a copycat criminal on his hands. Each of the stones lead Dale to a few more of the missing people, and he must solve the stones’ riddles correctly—or the hostages are killed.

Dale soon realizes that the kidnapper knows the details of his past. Including his dark secrets. Now, as Dale races to find the stones, he must come head-on with his own demons to have a chance at saving the missing people.

“You sure don’t look like a special agent.” The waitress eyeballed him. There was a small grin on her face that said, You’re either yanking my chain, or you’re completely full of crap. But, still, it was a nice smile. Pretty. Not the kind of smile that tells a story but one that gives a thousand little hints. Lots of sparkle. And a bit of mischief.

Dale couldn’t help but notice her other assets too, notably an illicit figure that did one heck of a job filling out her uniform—a light red, almost pink, dress with white trim around the edges, snug in all the right places. She was the new girl. Her nametag read Julia.

Dale was angling for her phone number, but the window of opportunity was small. The lunchtime crowd at Rich’s Diner was thick, and Julia had several other tables. In a sea of greasy spoons, Rich’s was the greasiest. It wasn’t the first place one would expect to find a federal agent in the middle of the afternoon, in the middle of Washington, D.C., in the middle of the 1970s. Everyone knew federal agents wore business suits and ate meals with three forks and five courses. But not BEI Special Agent Dale Conley.

“What do you mean I don’t look like an agent?”

Dale glanced over himself. He was wearing his usual—a T-shirt and 501s. His tan leather jacket was on the seat beside him. “What? Because I’m not wearing a suit?”

“You’re a mess. Your damn lip is bleeding!”

Dale checked his reflection in the window. She was right. The corner of his mouth was indeed split, blood already black and crusty in his two-day beard. Patches of sweat showed through his pale blue shirt. His thick brown hair and sideburns were disheveled.

He took a paper napkin from the holder on the table, dipped it into his water then wiped at his lip. He gave Julia a smile. “Occupational hazard.”

Half an hour earlier, Dale had been standing among the throngs of people at the Jefferson Memorial, in sunglasses and with a tourist pamphlet held up to his face. Near the base of the statue was his mark, a monster of a man in a long military field jacket. Six-foot-three with lengthy arms. His hair was unkempt, his face scruffy, and his eyes had that same wild look that all the crazies had.

His name was Willard Ledford, and he had been a person of interest for the FBI due to his weekly column in a local extremist newsletter. But when his credo turned from angry to outright deranged, the Bureau called the BEI.