You are here: Home / Book Listing / Swimming by Enza Gandolfo 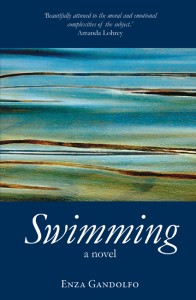 Enza Gandolfo was born in Melbourne, Australia in 1957, she is the daughter of Sicilian migrants. Her debut novel, Swimming (Vanark Press) released in 2009, was shortlisted for the Barbara Jefferis Award in 2010. Her previous books include: Inventory: On Op Shops with Sue Dodd (Vulgar Press 2007) and It Keeps Me Sane: Women Craft Wellbeing with Marty Grace (Vulgar Press 2009). Her short stories, essays, autobiographical pieces, reviews and articles have been published in a range of literary journals, magazines and newspapers.

Enza is a Senior Lecturer in Creative Writing at Victoria University. She is also the co-editor of TEXT: Journal of Writing and Writing Courses

Kate is a teacher and a writer, but she has never been a mother. She believes she has a good and satisfying life until a chance encounter with her ex-husband leads Kate back to an unfinished novel written twenty years earlier in which she described the impact on herself and others of her infertility, and of the betrayal that ends her marriage. Shifting between the past of ‘Writing Sarah’ and the present, the double narrative enables both Kate and the reader to confront and come to terms with the past.

Set in the western suburbs of Melbourne and on the surf beaches of the Great Ocean Road, Swimming is about loss and survival, betrayal and revenge, friendship and love. Beautifully paced, this is a novel that will resonate with anyone whose life hasn’t turned out as planned.

You look beautiful. See, I told you.’ Tess’s voice startles me.

‘Like a fossil to a scientist,’ I say as she draws closer and kisses me on both cheeks. Baci italiani, a life-long ritual. A game I played with Tess when she was a child shy of kisses and I was a middleaged woman who longed for a little girl’s affection.

In the photograph I’m standing waist deep in the ocean, smiling at the camera. Strands of wind-blown hair create a sense of motion, as if the wind is blowing me out to sea. My breasts are two heavy teardrops resting against my ribs, and my nipples, aroused by the threat of water and the gaze of the camera, are erect and firm. The flesh of my breasts, shoulders and belly is surprisingly smooth. All over I’m stained with sunspots, tea-brown in real life, transformed, in the photograph, into soft grey, like the shadows of clouds over a desert landscape. My arms stretch out, away from my body; my fingers skim the water. My face is marked by lines, by wrinkles, by the faint murmur of scars and blemishes. But it is also the face of the child I once was, that recognisable smirk of young Kate, who is caught out at something, her mischief-making discovered. I touch my real face, raising my hand to caress my cheeks, letting my fingers run along my neck.

I have arrived early on purpose, to see myself, the self Tess captured and hung on the wall. Usually, I hate photographs of 2 myself: they reflect an inferior Kate to the one imagined—older, fatter, more severe; they mock me: this is what you really look like.

I am reminded of my father, who during the last few years of his life lamented over photographs we took of him: you made me look so old. My mother and I winked at each other, caught our giggles and hid them around corners. Of course he was old by then; of course the photograph reflected his age—more or less, depending on the angle, the light—but he didn’t think of himself as old, not so old.

But I like this Kate. A playful Kate, a teasing Kate, dark eyes gazing out across the gallery. I’m both myself and someone else— Venus, the ancient goddess emerging from the ocean depths; and a plainish older woman bathing in the sunshine.

My mother wouldn’t have approved—making a public display of yourself, at your age. But I find this image of myself naked, fascinating. A curiosity. Brazen, yes, but yes strangely beautiful.

I move closer to the photograph; my footsteps on the wooden floorboards of the empty gallery are loud; they reverberate across the room, intrusive; they disrupt the ghostly conversations between photographed women—black-and-white and life-size—hanging along the three main walls.

Surrounding me, in the photograph, the sea, rippled with light and shade, has been embedded with text. I didn’t notice at first but now it’s unavoidable: faint, grey-and-white words, lines and half lines taken from my novels and short stories and woven into the sea: Mnemosyne’s claw, the mapmaker and her sister, a sleepy truth, the rock and roll of a rising swell.