You are here: Home / Book Listing / The Fool’s Truth 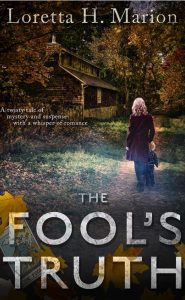 An author of fiction, Loretta Marion’s writing bridges the genres of women’s fiction, mystery and suspense, always with hints of romance and humor, sometimes delving into the psychological and paranormal. She creates strong but flawed and struggling characters as appealing as the rich atmospheric settings in which the stories take place.

A true bibliophile, Loretta’s affection for the written word began in childhood and followed her like a shadow throughout her life as she crafted marketing and promotional copy and educational brochures. She then applied her writing skills as a volunteer, establishing a Legacy Story program for hospice patients, which inspired her to create her own fictional stories.

Her debut novel, THE FOOL’S TRUTH, was awarded an Honorable Mention in Fiction from the 2016 New England Book Festival and the Gold Book Award from Hungry Monster Reviews. Though born and raised in the Midwest, Loretta fell in love with New England and has made it the setting for much of her writing. When not whipping out words on her laptop, she is traveling, enjoying outdoor pursuits, or is curled up with a delicious new book. She lives in Rhode Island with her husband, Geoffrey, and their beloved Mr. Peabody, a devoted and amusing “Corgador” (Corgi-Labrador cross).

THE FOOL’S TRUTH is a twisty tale of mystery and suspense with whispers of romance. On the run with her toddler daughter and a streetwise canine companion named Handsome, Cordelia Richmond is desperate to leave the country. But her dream for a new life in a safe haven quickly turns into a nightmare when a reckless detour and a thick fog strands them in backwoods Maine, where dark and dangerous secrets lurk.

Having wrecked her car and with nobody to turn to for help, Cordelia reluctantly accepts the offer of shelter on a secluded farm by a witch-like hermit living off the grid. Waiting for the car to be repaired, each day seems interminable in the company of the peculiar recluse who begins to come undone by their presence. The need to escape intensifies, but with no means of communicating with the outside world, further complications arise when the local sheriff and a nosy reporter begin poking around. Both men have ambitions for uncovering the truth, each with his own private reasons for taking refuge in the remote rural village of Murphy, Maine. Cordelia contemplates a risky strategy to flee her confinement, but is she desperate enough to enter the depraved world of a recently paroled convict with a history of brutality?

Long buried mysteries begin to unravel, placing Cordelia and her daughter in grave danger – and leaving her regretting the trail of lies in her wake. Especially to the one person who might be looking for her – lifelong friend and once lover, Ramon Alvarez. Their brief reunion at the beginning of Cordelia’s folly reawakened long suppressed feelings, but once again their timing had been off. She’s now running out of options and losing hope, while Ramon seeks to resolve the unsettling truths she has concealed from him. If only he could find her.

THE FOOL’S TRUTH is a twisty page-turner, expertly blending mystery, danger and suspense with the alluring possibility of romance from a once unrequited love. The novel has been awarded an Honorable Mention for Fiction by the 2016 New England Book Festival and the Gold Book Award from Hungry Monster Reviews.

I was not the least bit comfortable staying in a remote farmhouse somewhere in the boondocks of Maine with this peculiar woman.

“We couldn’t possibly impose. Is there a motel somewhere nearby?”

“It would be two hou-ahs round trip to the Inn at Four Corners,” the woman grumbled as she removed the body of a small animal from a makeshift spit and wrapped it in an animal pelt.

Could that charred carcass possibly be the mainstay of the meal that had been offered?

“I can pay you for your time and trouble.”

The woman grimaced then wrapped herself in a thick but tattered shawl and twisted her long mane into a knot at the base of her neck. “I won’t take any chances with my truck in this fog.”

Once again I was constrained by a shortage of alternatives and none that appealed. So I picked up my shivering child, and with Handsome trailing behind, I followed the strange woman.

The clipped response came so belatedly I thought I might have broken some back country rule of etiquette.

“How far of a walk is it to your home, Rebekah?”

“I imagine we’ll make it before dark.”

And not another word was exchanged on the long hike to our lodgings. It was just as well because my hostess for the evening bore too strong a resemblance to a character straight out of Murder She Wrote. For years I’d been pressed to join my mother in front of the TV on Sunday nights and wonder (duh) if Angela Lansbury would be able to solve Cabot Cove’s murder of the week. But right now I didn’t want to be thinking about my mother, in fact I was trying mightily to suppress the mental image of Lorraine Carlyle’s anguished face.

“This is cozy.” The farmhouse was sturdy and clean, if not a bit cluttered. I sat on the floor with Gabriella on my lap in front of the wood burning stove. The warmth was welcomed after walking a fair distance in the chilly evening breeze. But the quiver of ghost fingers crept up my spine as I studied the room more closely. On the table by the rocker were several prayer books and a large, well used Bible. A praying hands sculpture was displayed prominently in the center of the hearth mantle flanked by a pair of crucifix candlesticks. And scattered throughout the large living space were numerous crosses, pictures of Jesus and other religious statues and symbols. As a practicing Buddhist, I found it somewhat eerie to be sitting in the midst of this shrine to the Christian savior.

After the dishes were cleaned up, Rebekah offered to keep an eye on Gabriella while I took Handsome outside for his evening constitutional. When we returned to the sitting room, my daughter was sleeping peacefully as Rebekah rocked her.

“Shall we get her to bed?” I whispered.

I found the woman’s rapt expression disconcerting as she carried Gabriella to a second floor bedroom and gently placed her under the worn but downy soft quilts. But what was most disturbing was the sound of the door being locked from the outside after Rebekah left the room. I flipped open my phone for reassurance, but didn’t find it there. The farm was obviously beyond cell tower range. I tried to calm my fears by reminding myself that we were in fact the strangers in this situation.