You are here: Home / Book Listing / The Witch and the Wise Men

The Witch and the Wie Men 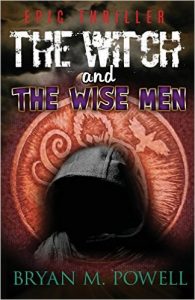 Novelist Bryan M. Powell is the author of 8 Christian Fiction novels, 2 Inspirational Books and 1 Memoir he co-authored. Working within a Christian ministry for over forty-two years, Bryan is uniquely qualified to write about Christian topics. His novels have been published by Tate Publishing, Lightening Source, Create Space, Kindle Direct Publishing and Vabella Publishing. His latest novel, The Witch and the Wise Men, held the #23 slot on Amazon’s best seller’s list. In addition to his novels, Bryan’s short stories and other works appeared in The North Georgia Writer (PCWG’s publication), Relief Notes (A Christian Authors Guild’s book, released in 2014), and in the Georgia Backroads magazine.

Along with his literary work, Bryan has over eighty choral and instrumental pieces to his credit as a composer/arranger.

Bryan lives in Dallas, Georgia, with his wife, Patty. They enjoy reading, travel, an occasional round of golf (with Patty driving the cart), and spending time with their two grown children and seven grandchildren.

The Witch and the Wise Men

An ancient medallion is discovered,

An evil spirit is awakened,

A witch’s curse is broken …

And the wise men of Bethlehem are called upon to face the ultimate evil.

When Mrs. White and her daughter, Abby, moved to North Hampton, a quiet town tucked away in the north Georgia mountains, little did the community suspect her real intentions. Then things began to happen … unexplainable things … dark things.

Sitting at a table illuminated by a single candle, Mrs. White, who calls herself the White Witch, reads the inscription on an ancient medallion. Halfway around the world, a spirit awakens.

It had been summoned.

Thirsty for blood, it possesses the White Witch and makes its demands known. “Give me a child for the Dark Lord.”

After two thousand years, the wise men of Bethlehem are released from the Witch of Endor’s curse and find themselves in North Hampton in the 21st century. Longing to return to their homes, they soon realize they can’t … not until they complete their mission … to save a Jewish child from the Dark Lord and destroy the Witch.

Once again, nine-time published contemporary Christian fiction author, Bryan M. Powell, masterfully crafts a spellbinding tale of love and redemption around spiritual warfare. As the battle between demonic forces and Heavenly hosts builds to a breathtaking crescendo, one truth becomes clear; the importance of the praying church.

On the order of Frank Peretti’s This Present Darkness and Piercing the Darkness, this novel will keep you reading all night … with the lights on.

By early October the following year, Glenn was anxious to get started decorating for the fall season. He and Colt entered the attic and began to rifle through the Halloween decorations looking for his prized centerpiece. Troubled he couldn’t find what he sought, Glenn returned downstairs calling for his wife and leaving Colt alone.

As his father disappeared down the stairs, Colt plopped down on one of the old kitchen chairs his mother refused to part with. Hands supporting his chin, he scanned the collection of boxes. One side of the attic held Halloween and Christmas decorations, while the other side held all the other seasons. It often bothered him why his father spent so much money on such extravagant items when so many people went hungry.

“God bless you,” Colt said, thinking his father had returned while he daydreamed. Turning, he stared wide-eyed at a plastic wrapped figurine marked, Balthazar.

Taken aback, Balthazar gaped at the young man. “Sorry, you weren’t supposed to hear that.”

“But I did. What are you doing up here?” The boy seemed to take meeting a two thousand-year-old year old clay figurine in stride. “Are you for real?”

“As real as we can be,” Gasper muttered, his face wrapped in bubble wrap. After pulling it out of his beard, he turned a wondering gaze to Balthazar. “I can’t believe it. We are actually—”

Balthazar’s raised finger stifled him before he said too much.

Melchior wiggled until he could see the boy. “You wouldn’t tell anyone, now would you? It can be our little secret.”

Colt nodded as he stared at the three figurines. “Mom says I’m not supposed to talk to strangers, so I can’t make any promises.”

Kneeling down, Balthazar got eye-level with the boy. “Well then, let me introduce you to my friends.” Hand on his chest, he said, “My name is Balthazar. I am from Baghdad. And this is Melchior. He’s from Persia, and Gasper is from India. We are the wise men who brought gifts to baby Jesus.”

Glancing from face to face, Colt gulped. He knew the Christmas story well. His father had read the second chapter of Luke every year as a part of their tradition, but meeting someone claiming to be from that time seemed a little beyond even his imagination.

“Hey wait a minute, I know this story. Are you telling me you are the same guys in the Christmas story?”

Stepping back, it suddenly occurred to Balthazar how long he and the others had been asleep. “Yes, we are the same guys, as you say.”

His face reflecting wonder, Colt stood and extended his hand. “My name is Colt O’Dell. But I thought you died a long time ago.”

“Well, I’m afraid news of our deaths has been greatly exaggerated.” Balthazar’s statement drew a raspy chuckle from Melchior and Gasper.

The Witch and the Wie Men