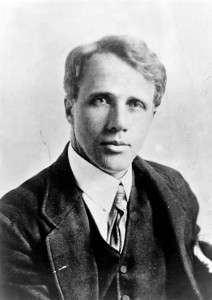 A BROOK IN THE CITY

The farm house lingers, though averse to square
With the new city street it has to wear
A number in. But what about the brook
That held the house as in an elbow-crook?
I ask as one who knew the brook, its strength
And impulse, having dipped a finger-length
And made it leap my knuckle, having tossed
A flower to try its currents where they crossed.
The meadow grass could be cemented down
From growing under pavements of a town;
The apple trees be sent to hearth-stone flame.
Is water wood to serve a brook the same?
How else dispose of an immortal force
No longer needed? Staunch it at its source
With cinder loads dumped down? The brook was thrown
Deep in a sewer dungeon under stone
In fetid darkness still to live and run?
And all for nothing it had ever done
Except forget to go in fear perhaps.
No one would know except for ancient maps
That such a brook ran water. But I wonder
If, from its being kept forever under,
These thoughts may not have risen that so keep
This new-built city from both work and sleep.