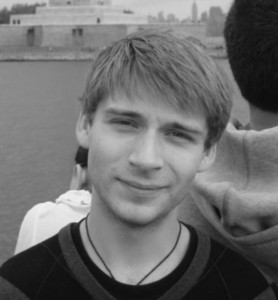 buildings, encasements in which to gather and
pretend that we are, any of us, of
any interest at all.

Long ago we abandoned what worth
there was,
the little substance that was ours.
Now just carbon copies
all done a million times before, to be done
a million times more.

Sounds and gestures repeated
over and again, ceaselessly. Each,
our own little contribution to the cold, robotic toil
daily
that forms these excuses
for lives.

Indelibly moving forward
being pulled and pulling along others
in our wake
dragging them
so we’re not alone, the irrefutable drag
of mass, the crowd as its own person,
consciousness,
monster that we create.

###
Bryan Pender is a writer of absolutely no repute or bearing whatsoever who was born in Midland, Ontario, Canada. Currently he resides in Toronto, Ontario, where he graduated with a B.A. in History from York University. Bryan has traveled extensively to such places as New York, Paris, London, Rome and Athens.