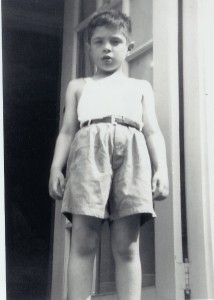 It’s a summer night and I’m very young.
We’re sitting in lawn chairs out back by his garden,
watching the shore traffic below on Route 61.
It’s hot and he’s drinking wine from a long-necked bottle.
I don’t like it. It scares me. My mother has filled me
with stories of what happens when men drink.
I have a Cott’s Cream Soda with ice, served in a tall
glass that once was a jelly jar.

“And do you know what I said?” he says again.

I know what he said. I’ve heard it a thousand times.
In the dark of night, the S.S. Anglia
glides past Battery Park, approaches
the Lower East Side.
Below decks, a young man
peers from black steerage
into the black night,
his wife and infant son
huddled nearby.
Before them sprawls a catacomb
of tangled streets,
crowded tenements,
airless sweatshops,
a panoply of factories
belching heat and light.

He looks at them,
thinking of Dante,
as he enter the rain-wet New World.

He looks off, far into the evening sky,
above rows of houses,
the endless lines of cars and grey exhaust.

And he waits, knowing that I will ask.
Does he forget that he’s told me so many times?
Or does he like that it’s become a ritual?
Our ritual.

“What does that mean, Nonno?”
He looks at me gravely.

He shakes his head
I shake my head, too.

Nonno Michele came to this country in 1908.
Educated. An artist. Did not believe the stories
of easy wealth and streets of gold,
but did believe, “The Promise.”
What he found were jeers
of “dago” and “wop” and “greaseball,”
was handed a shovel,
called a “giny” ditch digger.
Eventually, he practiced his craft
But as a carver of gravestones, water fountains,
the sarcophagi of rich people’s mausoleums.

My father told me
about the day he watched Nonno,
eyes fierce and brokenhearted,
tears cutting his cheeks like acid,
as the cold chisel edged the names
of his wife and only female child. A week apart.
A bleak December day.

Though America broke its promise to him,
he remained faithful. He pronounced it,
would always pronounce it,
“Ah-meddy-ga,”
with a certain gossamer lightness,
as if the word itself,
“Ah-meddy-ga,”
were dream enough.

Michael Campagnoli has worked as a waiter, fisherman, journalist, painter, and short-order cook. He taught literature and writing at Indiana University while studying for a Ph.D. His awards have included the New Letters Poetry Award, the All Nations Press Chapbook Award, and The Chiron Review Novella Prize. His fiction and poetry have appeared in New Letters, Nimrod, Southern Humanities Review, Rosebud, Natural Bridge, Inkwell, Palimpsest, Rattle, Yellow Medicine Review, Crucible, and elsewhere. He’s published three chapbooks of poetry. His poems and stories have been anthologized in Best New Writing of 2010 and ISFN’s Anthology #1. Three of his poems have been nominated for a Pushcart Prize.