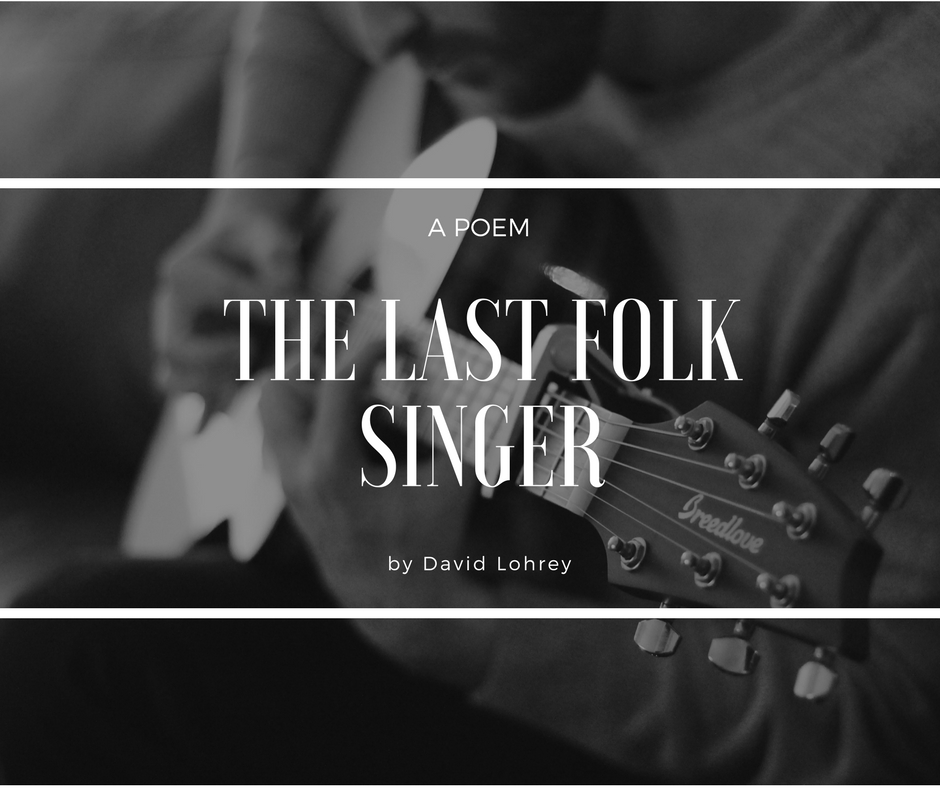 The last folk singer steps out onto the stage.
He carries his guitar and an old banjo.
They say he learned to sing from a
Jew in Kansas City but I know for a fact
he learned while in prison in the State of Utah.

They don’t call him a folk singer because
of his broken teeth. They don’t praise his looks
or his buckskin jacket. The last folk singer can barely walk,
and when he talks you can see his stained teeth. His voice
stands out and so does his ugly nose. But when he sings,
he makes grown men and women cry. They bawl.

When the last folk singer was young, the ladies held their breath.
He’d just wink and they’d fall out, as their friends screamed
and carried on, begging for more. He looks a hell of a lot like Pete Seeger,
but has had white hair from 30. He looks a little like Johnny Winter
and a whole lot like Andy Warhol.

People can remember him so well from when he was young.
He had long hair and never wore a shirt. They say he got his tattoos
while in state prison and he was sent there for stabbing his sister.
He croons and strums, hollers and cries; he plays his guitar real loud;
then he’ll get mad and storm out over nothing.

Furry Lewis who hailed from Memphis was said to have been
a friend but not his neighbor B. B. King, who didn’t like him one bit.
Rumor had it he came from Alabama, but Furry swore
he was born in a shit hole somewhere south of Jackson.

The happiest time of his life was the summer his tomatoes grew
the size of his wife’s favorite dinner plates. They were gigantic
and he took them with him to church in a basket to give away.
This went on for what seemed like forever, and he never forgot it.
The rest of the garden was fine, but when he thinks of those tomatoes he smiles.

The last folk singer began to lose his balance. His body began
to fail. At last, they wheeled him out in a special chair, a golden
throne on casters. He sat through most of his songs, but he always
stood for the Star-Spangled Banner and America the Beautiful.

The last folk singer hasn’t long to live. He’s given away most of his prized
possessions, including his Stetson and his Gibson guitar. Last week he sold me
his red boots and his silver buckle. He’s down on his luck. As he lay dying,
his manager, Burt Cole, waited for his final words. Even the doctor leaned in
and everyone hushed: “I never sing about nothing I didn’t know;
I never sing about love.”

David Lohrey grew up in Memphis. He graduated from U.C., Berkeley. His plays have appeared in the UK, Switzerland, Croatia and, most recently, in Estonia. They are available online at Proplay (CA). His poetry can be found internationally in Softblow (Shanghai), Cecile’s Writers’ Magazine(The Hague) and Otoliths (Australia). In the US, recent poems have appeared in Apogee, Abstract Magazine and Poetry Circle. Several have been anthologized by the University of Alabama (Dewpoint), Illinois State University (Obsidian) and Michigan State University (The Offbeat). His fiction can be read in Dodging the Rain and Literally Stories. His study of 20th century literature, ‘The Other Is Oneself‘, was published last year in Germany. Machiavelli’s Backyard, David’s first collection of poetry, appeared in August, 2017. David is a member of the Sudden Denouement Literary Collective. He lives in Tokyo.