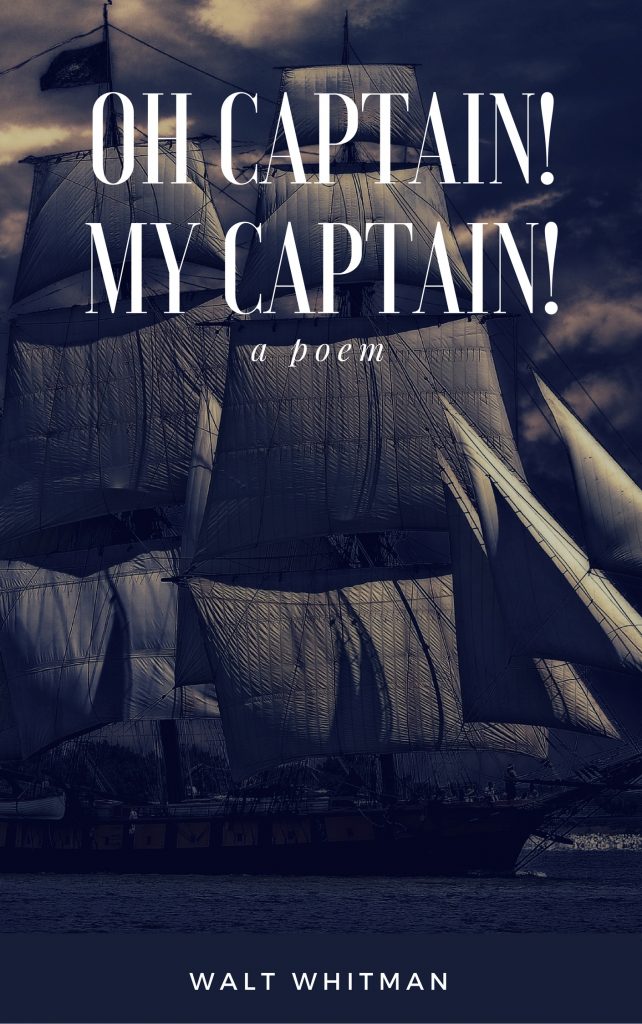 O Captain my Captain! our fearful trip is done,
The ship has weathered every rack, the prize we sought is won,
The port is near, the bells I hear, the people all exulting,
While follow eyes the steady keel, the vessel grim and daring;
But O heart! heart! heart!
O the bleeding drops of red,
Where on the deck my Captain lies,
Fallen cold and dead.

O Captain! my Captain! rise up and hear the bells;
Rise up–for you the flag is flung for you the bugle trills,
For you bouquets and ribboned wreaths for you the shores a-crowding,
For you they call, the swaying mass, their eager faces turning;
Here Captain! dear father!
This arm beneath your head!
It is some dream that on the deck,
You’ve fallen cold and dead.

My Captain does not answer, his lips are pale and still;
My father does not feel my arm, he has no pulse nor will;
The ship is anchored safe and sound, its voyage closed and done;
From fearful trip the victor ship comes in with object won;
Exult O shores, and ring O bells!
But I, with mournful tread,
Walk the deck my Captain lies,
Fallen cold and dead.

What does the poem Oh Captain My Captain mean?

What does the poem Oh Captain My Captain mean?

Whitman wrote Oh Captain My Captain in 1865 about the death of President Abraham Lincoln. The poem uses a metaphor of a ship for the country and a Captain for the president. Lincoln had guided the United States through the Civil War (1861-1865). The United States was torn apart, but the war had ended. The ship was coming home with the prize won (end of the war).

Lincoln was assassinated in 1865. So the ship (the country) is coming home, but the captain (President Lincoln) is dead.