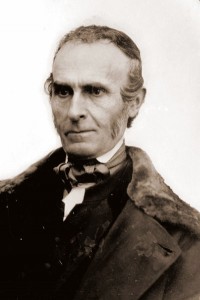 As o’er his furrowed fields which lie
Beneath a coldly-dropping sky,
Yet chill with winter’s melted snow,
The husbandman goes forth to sow,

Thus, Freedom, on the bitter blast
The ventures of thy seed we cast,
And trust to warmer sun and rain
To swell the germ, and fill the grain.

Who calls thy glorious service hard?
Who deems it not its own reward?
Who, for its trials, counts it less
A cause of praise and thankfulness?

It may not be our lot to wield
The sickle in the ripened field;
Nor ours to hear, on summer eves,
The reaper’s song among the sheaves.

Yet where our duty’s task is wrought
In unison with God’s great thought,
The near and future blend in one,
And whatsoe’er is willed, is done!

And ours the grateful service whence
Comes, day by day, the recompense;
The hope, the trust, the purpose stayed,
The fountain and the noonday shade.

And were this life the utmost span,
The only end and aim of man,
Better the toil of fields like these
Than waking dream and slothful ease.

But life, though falling like our grain,
Like that revives and springs again;
And, early called, how blest are they
Who wait in heaven their harvest-day!