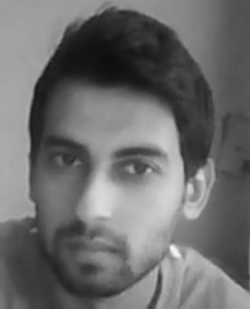 Around blue, white oceans,
in a blue and black house dwells a black
speck. So black, so blue
black alive, emotionally blue.

Sometimes like a fresh road, after the rain,
spellbinding every periwinkle and
sometimes imitating a baffled bluebird

he has had the blues so, so often that
he never listens to the blues and
his eyes have long gone into his
socks that smell of cheap cigarettes.

On his neighbors lips are perched
black curses that threaten to recreate
him every day, and his disloyal wife’s
hair flies in the wind in such a way
that she might inspire him into frothing
himself off some mossy cliff, any time
on one of those moonlit, blue nights.

He’ll never understand that he’s
the symbol of a country losing itself
because of people like him.

Born in 1983, Amit Parmessur lives with his black cat nowadays. Since 2010, his poems have appeared in more than 100 literary magazines. His book on blog Lord Shiva and other poems has also been published by The Camel Saloon. He is nominated for the Pushcart Award and lives in Quatre-Bornes, Mauritius. As long as he gets published, he knows he is on the right track.