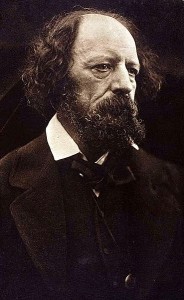 The Poet and the Lily by A. B. S. Tennyson

A poet was born in a modern time,
‘Neath Saturn and his Rings,
He was a child of the world’s prime,
Knew all beautiful things.
He was a child of morning and mirth,
Laughing for joy of the sun,
His nostrils drank the scent of earth
When rain is over and done.

A lily came from the winter’s womb
And grew in its own sweet pride,
But the ruthless steel passed over its bloom,
And low in the dust it died.
And the poet’s heart was filled with pain
That a delicate thing and rare
Should be reft of the beauty of which it was fain
And killed by the cruel share.

So he sang of the meadows white with lambs,
And life all young again,
Of the colts which gallop to their dams,
Knowing not any rein.
He sang of the spring upon the sea,
Hedges all white with may,

The year in its sweet infancy,
This our great world at play.
Of shepherds piping to their flocks
Across the fields of thyme,
Of sunlit fields above the rocks,
Where the small waves lap in rhyme.
Of glancing maids and youths their peers,
For ever young and free,
With faces fair, and in their ears
Great music of the sea.

He sang the amber moon a-sail
In an even of misty blue,
The stars which burn, the stars which pale,
The might which holds them true;
The comets in another sky
Which sweep to an unknown morn.
He sang of some vast agony
Or ever a world was born.