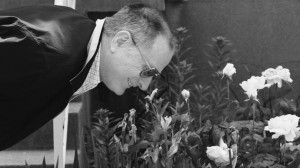 Forty years older than I,
Charles, in his tweed cap, stands starched
in gray chino and blue chambray.

For more than a year his broad tie
has let the same iridescent duck
fly against a vermillion sky.

far corner to far corner
as I cleave two triangles of cars
parked in my wake.

I ask him one morning,
Charles, do you mind
when I cut through your lot

Not at all, sir, says Charles
as he stares straight ahead
and starts the windmill

of his good arm to lead
the pearl Hummer
now pulling in.

Donal Mahoney has worked as an editor for The Chicago Sun-Times, Loyola University Press and Washington University in St. Louis. He has had poems published in The Wisconsin Review, The Kansas Quarterly, The South Carolina Review, Commonweal, The Christian Science Monitor and other publications.