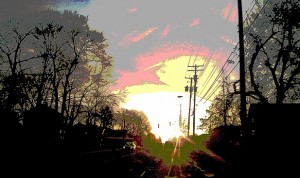 You do not know her, not really
Nor do I, neither did the men
Who took her and did whatever
Bestial strangers do to fleshy things

One sneaker found at the edge
Of the small, once-safe town
Two pitiless killers guzzling a beer
Somewhere in western North Dakota

Tim Dyson is a retired corp HR pro, living in SE Pa. with beautiful spouse of thirty years, many poems published over last few months including two nominated for 2011 Pushcart.