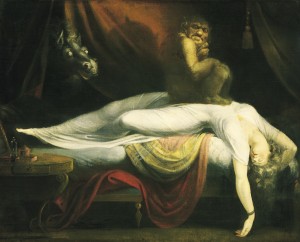 ?? Mr. Spruggins got up in the cold dawn
?? And remade the fire.
?? Then he crept back to bed
?? By the light which seeped in under the window curtains,
?? And lay there, shivering,
?? While the bells of St. George the Martyr chimed the quarter after seven.