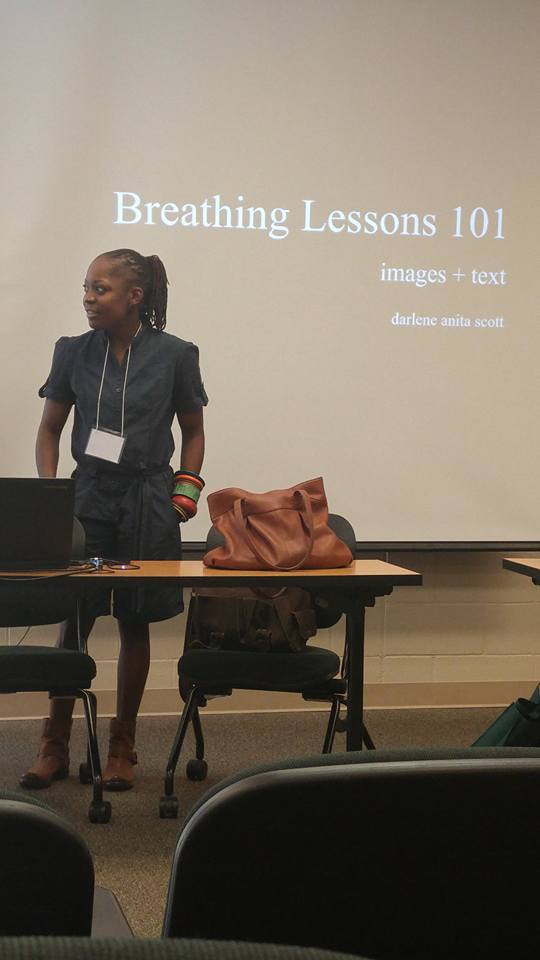 After Kindred, 1979
It looks like noise.
The interruption of her is not just blood
but a cautious letting of the tools of a trade
long benefiting others while she stood
with one half her arm buried in a wall,
a time, a space that travels through her veins
as if an intracoastal waterway between Now and Then.
Sometimes when I drive I-95,
the part that is the Route 1 of my father’s boyhood,
the autosave feature of my blood flips through its catalog.
It could be noise.
My dad appears in my dreams and my temper
often enough that when his phone number appears
on my caller ID, Daddy? I say jovially like a joke
is being played, half expecting to hear
water, humming. Which may explain
when I met her, I already knew her.
The blood does not forget. And noise is its
coagulate. This. Many times.
Every time: genesis.

darlene anita scott is an insatiable daydreamer and so-so runner who likes homemade popcorn and alone time–not necessarily together.

Her poetry appears in diode, The Baltimore Review, Quiddity, and J Journal among others.

scott’s manuscript Marrow imagines Jonestown Guyana, a spiritual community whose residents were coerced into suicide by their spiritual leader. It was a semi-finalist for the Crab Orchard Review First Book Award and still seeks a publisher. In the meantime she is developing Breathing Lessons 101 a poetry collection illustrated with her own photos that explores the good girl stereotype as it is applied to girls of color.

scott lives and teaches in Virginia.