You are here: Home / Evans / The Cold Sausages in my Neighbourhood by Owain Evans 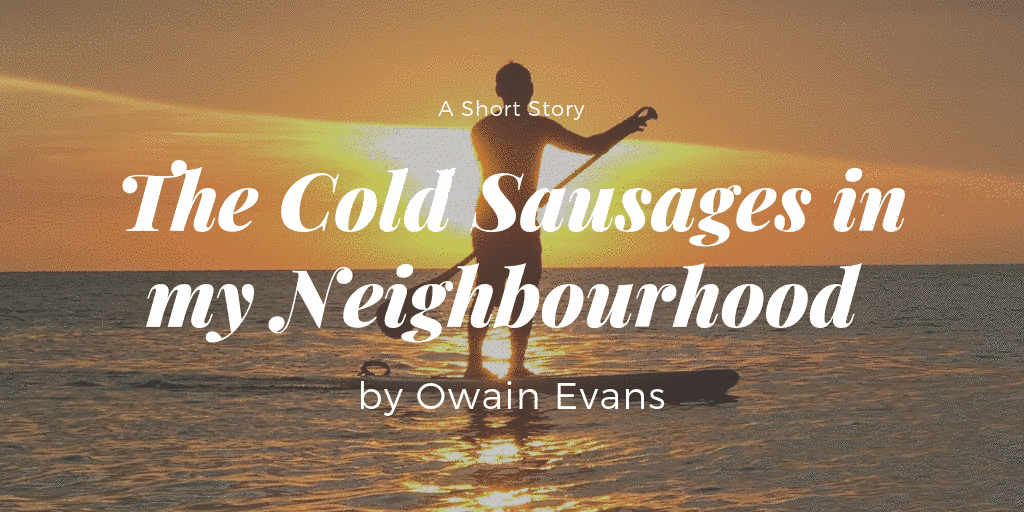 The Cold Sausages in my Neighbourhood

I stood in the paddling pool. It was the first week of the summer holidays and mum was throwing the party she told dad she wouldn’t. My mum was everywhere, handing out drinks, but my dad was in a gap in the curtains, watching.

The Davies kids from across the road were in the corner. The two smaller girls were talking but the older boy just stared over at me. I stared at him. He waved. I waved. He held up seven fingers and I knew what he meant. I held up six. Then he turned to watch too.

His dad was smoking but then mum asked him to stop. He stopped and smiled but when she looked away the smile stopped too. He said something. He was watching his wife who was talking to the new man who had recently moved in and the Matthews brothers who shared a house down the road. She laughed. Her husband came over and shook hands with the new man and pulled his wife away. She pushed his hand off her and went to the drinks.

The Cooper twins and their dog were running around the garden near the pool. Mr White, who was retired even though he was only fifty-two, was sitting and drinking and watching and drinking. Mum invited him even though not many people liked him. I don’t know why. The three other Cooper children, Martin and William and the girl whose name I don’t know, were throwing stones over the fence into the White’s garden. Mr Cooper shouted at his children but everybody listened. He had sweaty armpits and creased trousers. Mrs Cooper couldn’t come because she left three weeks ago.

Mum called everyone to the food. They ate most of the food but the wind took some crisps. No one noticed. Martin Cooper was pinching grass and dropping it in the lemonade. His dad grabbed him by the arm and Martin cried. Nobody looked but everybody saw. Mr Cooper became embarrassed and took the children home. The Matthews brothers were arm-wrestling and the new man was watching but kept looking over his shoulder at Mrs Davies who was looking at the floor. My dad was outside now with Mr Davies. He started to smoke and my mum had her face on. He saw her, turned away and lit Mr Davies a cigarette. They didn’t speak.

I turned and saw Mr White kneeling next to me spilling his drink. His breath smelled sweet but old. He said something but I didn’t understand. Mum called me over and I obeyed. She held my hand and then Mr White left.

Later that night my mum was in the kitchen speaking through a wall to my dad about the party. She said it had gone well and that she was pleased. He wasn’t listening but agreed. She stared at her reflection in the window and sighed. Then she saw me in the reflection, smiled, and continued putting cold sausages into plastic containers.

###
Owain Evans is a young Welsh writer studying a Creative Writing MA in Cardiff University. His work is exhibited on his blog at the following address: http://owainglynevans.wordpress.com/