You are here: Home / Articles On Writing / What Exactly is Creative Nonfiction?

When I was an undergraduate at UNM (University of New Mexico), I took Intermediate Creative Nonfiction, a class that should have branched out into various forms of nonfiction, but instead stuck solely to memoir and the personal essay. This does not mean I am not in favor of the memoir; it is the genre that holds every ounce of humanity, validity, and originality of our experiences. But when I broke the tradition by writing a piece on social Movements & organizations, the workshop was not very successful. Because writing students often apply the elements of fiction: plot, setting, characters, point of view, theme, conflict, revision suggestions were unclear because those elements are not always applicable. They appreciated the content but lacked critical revision suggestions. While it’s encouraged by college professors and writers of a community to pen a jaw-dropping memoir, there are some variants of creative nonfiction we have yet to explore. 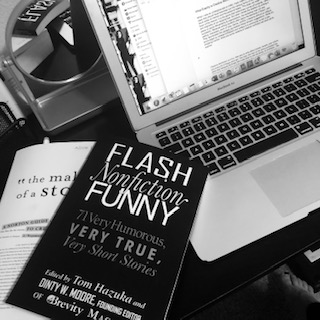 Creative Nonfiction is a fun, free way to write about places, people, pop culture, and every bit of happy and sad. The map, the man at my store purchased the other day because he finally felt it was time to visit his family, is nonfiction. The 100 Most Jewish Foodscookbook I spotted after a night of closing and read about the Jews admiration for Chinese food and then laughed at the pure honesty is nonfiction. This piece is nonfiction. Writing for information, to persuade, to tell a story.

Here are a couple of examples & types of nonfiction:

2.   Any of Lydia Bastianich’s recipes

Creative nonfiction lets us express not only our own, but other people’s reality. But what is it about reality that’s so jaw-dropping? I understand it to be about the challenges of life. We have questions about everything, and we’re concerned about the goings on around us, so we rely on one specific genre to answer them. Take, for example, the most comprehensive form of media, a cartoon. Sure, we can just kick back in our pajamas with a bag of chips and slap our knee every time Jerry outwits Tom and call it a night, but in order to write nonfiction, we must look deeper into the subject. In order to write, something must want to be said. I wrote about the cultural landscape of 1940s Manhattan for a specific Tom & Jerry episode for a pop-culture writing course at UNM. Because I’m from New York, I wanted to see how the producers captured such a big city in the 40s:

[color-box]“Dancing was a popular cultural and social action, and depending on the year, it served aesthetic and symbolic symbolism. The ballroom dancing act Jerry engages in is with an inanimate, feminine-like model designed to resemble attractive women, and illustrates the ideal of feminism of the forties with high feminine appearances, such as long gowns, bright cosmetics, and polished high-heeled shoes, so shiny, Jerry is able to see a clear reflection of himself. It’s important, and quite ironic, to look dapper and dandy while walking the streets of New York, while there’s trash on every corner. Think of Marilyn Monroe in cartoon form, or in this case, Jerry’s miniature dancing partner, a dead ringer for Betty Boop.”[/color-box]

When writing nonfiction, it’s important to apply some (or all, if possible) elements of fiction to give the reader the same experience. Because someone who hasn’t been to New York, or even to New York in the 40s, for that matter, will have a harder time processing an accurate environment. Reliability and credibility are the rhetorical components of literary criticism. Ethos, pathos, and logos determine whether the person researching and writing on a specific subject has the appropriate authority to do so.

If you want an idea of how much writing is nonfiction, read this interaction I had at work:

A customer walks in Barnes & Noble and asks, “Where’s your nonfiction?”

My eyes glanced around the store, hoping she’d catch on and answer her own question. I said, “See these four isles labeled fiction? Imagine we got rid of them.”