You are here: Home / Articles On Writing / 10 Words Editors Hate 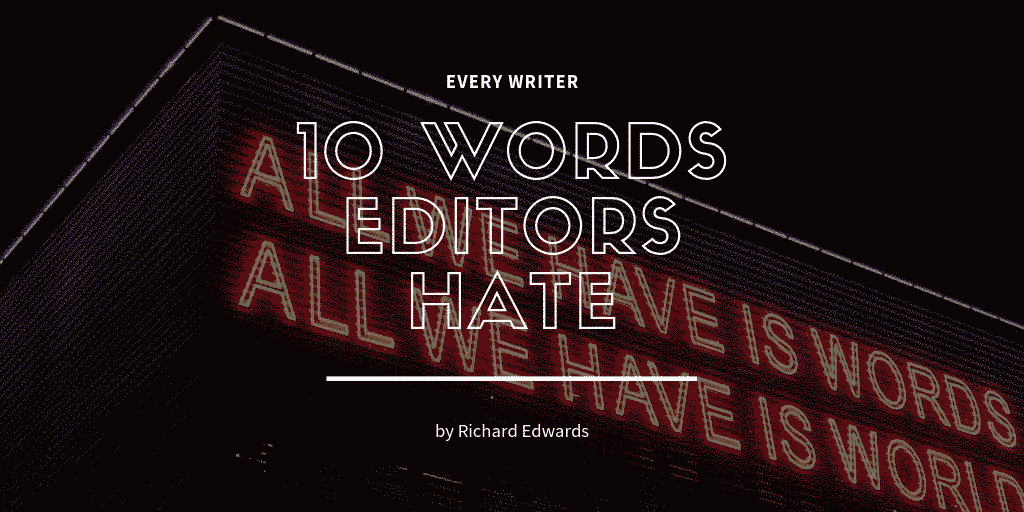 We are talking about literary writing here. In most cases, genre writing tends to be a little different, and some of these words are much more acceptable to editors in genre pieces. These words are not bad words. Please understand. They are words that tend to lean toward cliché in poetry and in literary fiction. Contemporary writers are finding countless interesting and new ways to say these words.

If you use these words in your poetry or writing, be very careful. They are so charged, as an editor, I’ve stopped reading because of them. They can of course be used in ways that are not cliché, but many times just the sight of them can send your work into the DO NOT PUBLISH pile.

Many editors simply hate it. I was sitting in a first year university writing workshop years ago, when a student wrote “eyes are the windows to the soul.” The professor, a well-know poet who had won many awards and who was one of the nicest people you have ever met (a great teacher) freaked out! He was also the editor of a well-know highly-awarded Mid-western literary magazine. He completely lost it. The Professor paced back and forth across the classroom. He was even a little red-faced, and said how cliché and how even childish this phrase was. I always saw him encourage writers, but at this point he got very real, and I can’t remember his exact words, but they were something like, you will never get published or be professional writing phrases like this!

2. Heart- this word also can get a manuscript rejected quickly!

Again, when I teach writing I highly recommend to my students to avoid this word unless you using it in a very non-traditional way. It’s just way overused. If you look at classic poetry, especially Renaissance poetry, you can see that poets of the time beat the meaning out of this word.

3. Love-ugh, so many other ways to say this one.

I once handed a poem in, in a writing workshop, on a master’s level, and the writer teaching the course, she was also well-know, said, simply, the word love, in writing, in poetry is “completely meaningless.” It took me a long time to figure this out, but that is why the words on this list are so dangerous. They have been overused to the point that they do not meant ANYTHING. They cause an automatic response. There are no feelings left in these words. It’s ironic. These words are the words that should hold the most meaning.

Example using some of these words:

“Her heart broke, she felt so much love for him her soul was turning dark.” This sentence puts all the work on the reader, and it doesn’t mean a lot. What if the reader hasn’t ever had a broken heart.

Alternative: The bottom fell out of her lungs, their was a dull pain in hear chest. Flashes of memories of her holding his head in her lap, him smiling up, her laughing down at him. Inside she felt someone had just unwrapped her insides. It was like she was naked and a chilling wind was blowing over her.

So this description tries to show the feelings, love, broken-heart, and soul to the reader. It does the work for the reader and shows, it doesn’t tell. I know this description isn’t perfect either. I know many writers could do much better, but you get the idea. The words heart, soul and love are telling not showing.

4. Warmth-tread lightly here. Nine times out of 10 this one will get you rejected.

Here is another word that does not give me a description. It has been used as an alternative to clichéd words so many times, that it too has lost all meaning. When you say warmth, you are relying on the reading to bring the feeling.

5. Windows-oddly, more times than not this one is used in a cliché way. Windows to the soul…

I’m talking here, about using windows as a metaphor. It’s way over done. Windows have been over played, overused. If your character is just looking in a window, it’s not a bad thing. Editors do not run from looking in a window. But when the window to the soul or heart or love or opportunity opens, editors tend to glaze over and stop reading.

The word forever is hard to use. It really doesn’t have a meaning. If you are writing something about god or science or maybe something clever, but for the most part we cannot comprehend the meaning of this word. There is no frame of reference, and if you say it was there forever, or I will love you forever or it even seemed like forever, you are using hyperbole. If you are being funny, maybe, but most times this word can be replaced with something we can relate to better. Humans really have no concept of forever.

7. Death-ok to write about, not great to say.

Yeats said their were only 2 things that writers should write about: sex and death, so sex and death tend to 2 things editors scrutinize more than other concepts in writing.

If someone dies, they die. It’s a fact of life, but again using death as a metaphor or doing it in a way that is cliché really send editors running. The problem with these words are they put the editor, many times, on high alert, so they demand more from the writer. As an editor, I become very aware of how someone is using the word death in writing. If I even sense it’s going the wrong way, I usually stop reading.

Life is the same as death when it comes to how quickly it can turn an editor off. When a writer starts talking about the meaning of life, I generally give out a moan and start typing my rejection letter.

9. Feeling- talk all you want it to about them, just don’t say the word.

This is one of those cases that really saying a feeling doesn’t have any meaning. It is just label. It’s a tell not show kind of thing, so you want to give a description that makes me feel the way you feel, without telling me the label of how you feel. I was angry or I was clinching my fists so hard later I would learn my nails had drawn blood from my palms.

Notice even George Lucas doesn’t talk about the light side of the force in his movies. He will talk about the dark-side, but the light is either Jedi, or just force. Now in the books and other places the light side is used, but in has a nuance to it.  It is used much more sparingly than the dark-side. ‘Bringing something into the light.” “The light of truth.” “Shine some light on it.” As a metaphor these are horribly overused. I would avoid them.

In summary, I am not trying to start a flame war here. I am simply saying these words usually put editors on high alert. Once you’ve drawn this card, the editor is looking for a reason to discard your writing. Most editors I know truly dislike these 10 words. They are like fingernails on a chalkboard, but if you can figure out how to use these words in a non-cliché way, your writing rises to such a high quality that you take something so overused and make it new, generally it’s the highest form of art. Taking this risk, however, is not for the faint of heart…your soul may suffer…you may in fact open a window into the heart of your folly and that would certainly be the death of your submission.

If you dislike me a good deal for saying these thing, or you feel like I’m right (it’s rare, but could happen) leave me a comment below. I will respond to it. You should know this was an old piece that was much expanded and rewritten.