You are here: Home / Classic Articles on Writing / Introduction to Wilfred Owen’s Poems by Siegfried Sassoon 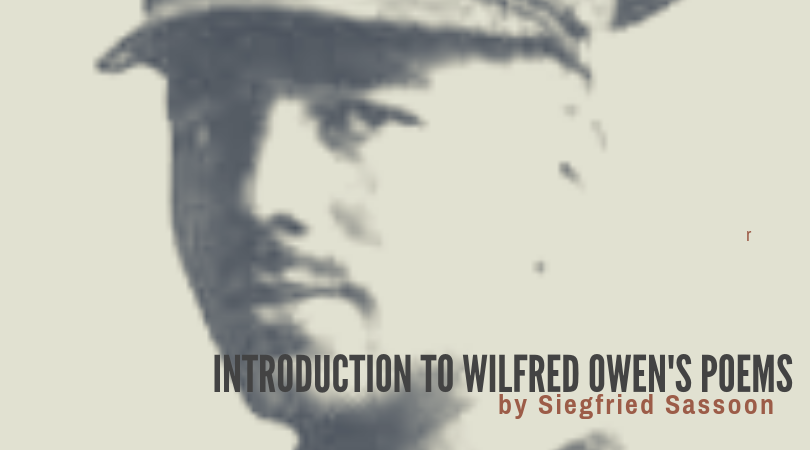 This is a wonderful Intro to Wilfred Owens book of poems by  Siegfried Sassoon. If you haven’t read it, you should. It is a awesome little piece of history between 2 poets that had the greatest impact on all poetry that has been written after the Great War.

In writing an Introduction such as this it is good to be brief. The poems printed in this book need no preliminary commendations from me or anyone else. The author has left us his own fragmentary but impressive Foreword; this, and his Poems, can speak for him, backed by the authority of his experience as an infantry soldier, and sustained by nobility and originality of style. All that was strongest in Wilfred Owen survives in his poems; any superficial impressions of his personality, any records of his conversation, behaviour, or appearance, would be irrelevant and unseemly. The curiosity which demands such morsels would be incapable of appreciating the richness of his work.

The discussion of his experiments in assonance and dissonance (of which ‘Strange Meeting’ is the finest example) may be left to the professional critics of verse, the majority of whom will be more preoccupied with such technical details than with the profound humanity of the self- revelation manifested in such magnificent lines as those at the end of his ‘Apologia pro Poemate Meo’, and in that other poem which he named ‘Greater Love’.

The importance of his contribution to the literature of the War cannot be decided by those who, like myself, both admired him as a poet and valued him as a friend. His conclusions about War are so entirely in accordance with my own that I cannot attempt to judge his work with any critical detachment. I can only affirm that he was a man of absolute integrity of mind. He never wrote his poems (as so many war-poets did) to make the effect of a personal gesture. He pitied others; he did not pity himself. In the last year of his life he attained a clear vision of what he needed to say, and these poems survive him as his true and splendid testament.

Wilfred Owen was born at Oswestry on 18th March 1893. He was educated at the Birkenhead Institute, and matriculated at London University in 1910. In 1913 he obtained a private tutorship near Bordeaux, where he remained until 1915. During this period he became acquainted with the eminent French poet, Laurent Tailhade, to whom he showed his early verses, and from whom he received considerable encouragement. In 1915, in spite of delicate health, he joined the Artists’ Rifles O.T.C., was gazetted to the Manchester Regiment, and served with their 2nd Battalion in France from December 1916 to June 1917, when he was invalided home. Fourteen months later he returned to the Western Front and served with the same Battalion, ultimately commanding a Company.

He was awarded the Military Cross for gallantry while taking part in some heavy fighting on 1st October. He was killed on 4th November 1918, while endeavouring to get his men across the Sambre Canal.

A month before his death he wrote to his mother: “My nerves are in perfect order. I came out again in order to help these boys; directly, by leading them as well as an officer can; indirectly, by watching their sufferings that I may speak of them as well as a pleader can.” Let his own words be his epitaph:—