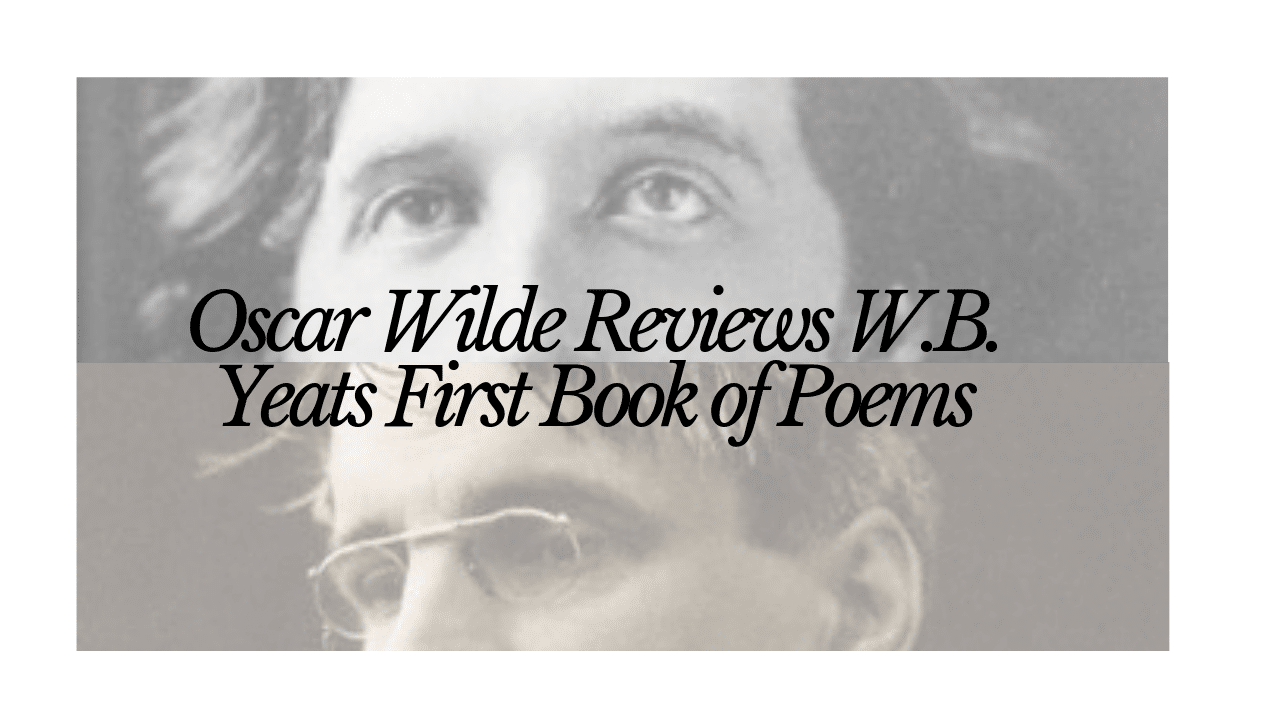 ‘The Wanderings of Oisin and Other Poems is, I believe, the first volume of poems that Mr. Yeats has published, and it is certainly full of promise.  It must be admitted that many of the poems are too fragmentary, too incomplete.  They read like stray scenes out of unfinished plays, like things only half remembered, or, at best, but dimly seen.  But the architectonic power of construction, the power to build up and make perfect a harmonious whole, is nearly always the latest, as it certainly is the highest, development of the artistic temperament.  It is somewhat unfair to expect it in early work.  One quality Mr. Yeats has in a marked degree, a quality that is not common in the work of our minor poets, and is therefore all the more welcome to us—I mean the romantic temper.  He is essentially Celtic, and his verse, at its best, is Celtic also.  Strongly influenced by Keats, he seems to study how to ‘load every rift with ore,’ yet is more fascinated by the beauty of words than by the beauty of metrical music.  The spirit that dominates the whole book is perhaps more valuable than any individual poem or particular passage, but this from The Wanderings of Oisin is worth quoting.  It describes the ride to the Island of

And the ears of the horse went sinking away in the hollow light,
For, as drift from a sailor slow drowning the gleams of the world and the sun,
Ceased on our hands and faces, on hazel and oak leaf, the light,
And the stars were blotted above us, and the whole of the world was one;

Till the horse gave a whinny; for cumbrous with stems of the hazel and oak,
Of hollies, and hazels, and oak-trees, a valley was sloping away
From his hoofs in the heavy grasses, with monstrous slumbering folk,
Their mighty and naked and gleaming bodies heaped loose where they lay.

More comely than man may make them, inlaid with silver and gold,
Were arrow and shield and war-axe, arrow and spear and blade,
And dew-blanched horns, in whose hollows a child of three years old
Could sleep on a couch of rushes, round and about them laid.

And this, which deals with the old legend of the city lying under the waters of a lake, is strange and interesting:

The maker of the stars and worlds
Sat underneath the market cross,
And the old men were walking, walking,
And little boys played pitch-and-toss.

‘The props,’ said He, ‘of stars and worlds
Are prayers of patient men and good.
The boys, the women, and old men,
Listening, upon their shadows stood.

A grey professor passing cried,
‘How few the mind’s intemperance rule!
What shallow thoughts about deep things!
The world grows old and plays the fool.’

The mayor came, leaning his left ear—
There were some talking of the poor—
And to himself cried, ‘Communist!’
And hurried to the guardhouse door.

The bishop came with open book,
Whispering along the sunny path;
There was some talking of man’s God,
His God of stupor and of wrath.

The bishop murmured, ‘Atheist!
How sinfully the wicked scoff!’
And sent the old men on their way,
And drove the boys and women off.

The place was empty now of people;
A cock came by upon his toes;
An old horse looked across the fence,
And rubbed along the rail his nose.

The maker of the stars and worlds
To His own house did Him betake,
And on that city dropped a tear,
And now that city is a lake.

Mr. Yeats has a great deal of invention, and some of the poems in his book, such as Mosada, Jealousy, and The Island of Statues, are very finely conceived.  It is impossible to doubt, after reading his present volume, that he will some day give us work of high import.  Up to this he has been merely trying the strings of his instrument, running over the keys.

The Wanderings of Oisin and Other Poems.  By W. B. Yeats.  (Kegan Paul.)