You are here: Home / Publishing Your Writing / Simultaneous Submissions 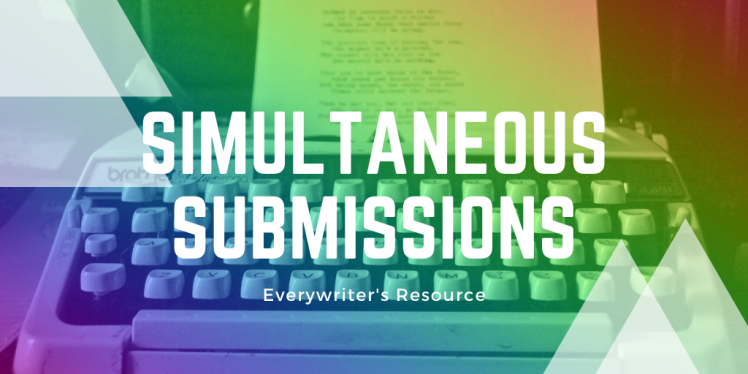 Why Simultaneous Submissions are Essential

Writing can be an exhausting endeavor, especially if you’re a family oriented (or just busy) person. Trying to juggle your household responsibilities, a proper diet and exercise, errands, and most likely a day job, finding time to write can be tough. When you do get a moment of blissful silence where you can sit back and reflect a little, maybe even get some thoughts to paper, it makes you feel accomplished; for a minute, anyway. Then you remember it’s 2017, and now more than ever, your writing career depends on you.

That little slice of time we make to write consists not only of actually writing, but of marketing, platform-building and connecting with your network. You somehow have to find time to keep up with your social media, maintain a website with blog posts, interact with other authors and writers, and continuously research the ever-changing landscape of publishing. It can all seem overwhelming because it is overwhelming, but one simple thing can be a huge life saver when it comes to getting your work out there: Simultaneous submissions.

Anyone that has submitted any kind of work to a literary magazine or some other kind of publication knows that pretty much every one of them accept simultaneous submissions, but I’ve recently noticed that even in this day and age, there are still a few that don’t. It makes me wonder, is it cockiness or short-sightedness that drives their decision? While both of them are equally bad, the former is something that kind of grinds my gears.

For those that aren’t familiar, a web service called Duotrope helps track thousands of magazines and other publications that accept submissions. It’s a full-featured site that has a ton of really helpful information and is invaluable to the up-and-coming writer and established writer alike. One of the things you can find here is the response time from a potential market. If you’re like me in the beginning, I thought I would be able to submit a piece and hear back within a day or two, but boy was I wrong. A quick search shows that some markets take an average of almost a year to respond. A year! While that statistic is on the extreme end, it’s not far off from what you learn to expect.

The aforementioned market has received over 2,400 reports in the last year. Of the 2,400, 91% of them were responses to their submission (while others were a mixture of non-responses, lost/returned and author withdrawal.) 90.43% of them were rejections, which minus the reports above, leaves a measly 0.21% of acceptances. On top of that, Duotrope adds, “Rejections are often underreported, which skews the statistics in favor of acceptances. Most markets have a lower acceptance rate than indicated here.”

When I first noticed this, I was floored. I never imagined that it would be so low. As time went on, though, it made more sense to me. There are literally thousands of submissions per week (as of right now Duotrope reports 5,490 within the last 7 days) and only so many places for them to go. So with as many submissions as there are, against the small amount of listings, their limited space available, the time it takes to hear back, and the dismally low amount of acceptances, the only rational plan is to submit a piece to several markets at the same time. Take into account some writer’s advice to only submit to markets that pay pro rates for submissions, and your chances drop dramatically still. There are even markets that have zero acceptances listed in the last year.

Why then, with this information at hand, do some markets still not allow simultaneous submissions? Do they really think we have time to wait upwards of a year between submissions when the rejection rate is so high? Call it ego or one of the ways to cut down the slush pile, of which there are a few (and charging submission fees is one of the worst.) Either way, these markets are cutting out a huge number of prospective writers.

To me, what it comes down to is whose time is more valuable. For those that choose to follow the rules instead of just simultaneously submitting anyway, do not fret; there are plenty of markets out there that welcome your submission, regardless of how many you’ve sent your piece to. Just be courteous and follow each market’s guidelines, which is usually just simply emailing them if your work is accepted elsewhere.

Roy Miller is a film lover, cat person and contributing editor to his local newspaper. His works have appeared in various literary magazines and websites. He has 3 self-published titles and currently lives in Michigan with his girlfriend and several pets.