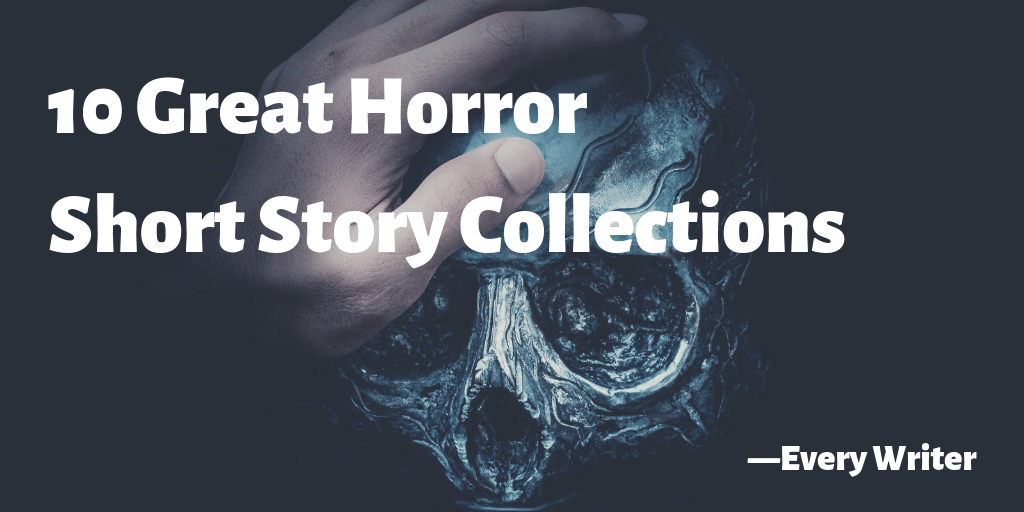 Here is our list of 10 “Great” horror story collections. Please do not get hung up on the tile of the article, and remember we are writing this (as always) from the perspective of writers. We are not just talking about short stories that are great, we are listing story collections we think every short story writer should read if he or she is writing horror stories. These books and these writers are so influential we feel that they must be read. We are call them the greatest because we think they have had the greatest influence on horror writers over the last 100 years or more. These writers either defined or changed the face of horror writing, and these collections represent stories that are so important to read that we feel they have to be called the greatest horror collections. We encourage you to buy these books, read these authors, and find your own voice to speak to the history of horror and writing.

The October Country by Ray Bradbury (1955)

I certainly wouldn’t say that Bradbury is all master of horror, but October Country is on my must read list for horror authors. Ray was such a larger than life talent. His works were so good, his vision so pure, really the writers of any genre should honor him by reading his books.

I would say the greatest collection of stories ever, Hawthorne’s Twice Told Tales is scary, creepy, and a must read. It influenced so many to come in the future. Even Poe wrote a long review of the collection, praising Hawthorne for his writing.

This collection came out in 1919, but honestly any “complete works” of Poe will do. Poe, better than any other author, makes this genre his. Some have a little style, some have a little voice, but Poe has a strut. He knows what he is writing is scary. Most American know and have read something of Poe, and all horror writers should read every Poe story ever written, just to be safe.

The Lottery and Other Stories by Shirley Jackson (1949)

I would say this is one of the greatest collections of horror stories ever, ever. The Daemon Lover and the Lottery are 2 in particular that have immortalized Jackson as one of the great writers of the 20th Century. Read this collection you won’t be sorry.

The Call of Cthulhu and Other Weird Stories (1999)

The master of horror, so popular and scary Lovecraft influenced almost every writer to write horror in the 20th century. He is honestly unparalleled. This collection is one that sort of set the standard for scary collections. Read it, now.

The way people look at Lovecraft now, will be how they look at King in the future. You have your detractors, but King at this point has to be accepted as at very least the greatest living horror author. If that’s the case, then the greatest horror author of the late 20th century has to be Stephen King. I think 100 years from now, people will still agree. I could make a greatest novels of horror list, just from his works.

The White People and Other Weird Stories by Arthur Machen (1890s)

The White People has been called, over and over, by so many authors “The Greatest Horror story ever.” It turns out that other stories in Arthur Machen’s collection are pretty flippin’ scary too. If you are a horror writer Machen is a must read.

James is another one of those authors who had a heavy influence on all the writers that came after. His impact isn’t as obvious as Lovecraft’s, but it’s still there. He is a fantastic horror author, and this collection is one of the scariest out there.

Barker, more than many writers, takes the genre and turns it on its head. His books are scary, but they are also a twisted take on the genre. He makes hell a new place, makes the devil new, makes us realize that maybe the unknown really is scarier than our fears of it. Maybe we are not afraid enough….

The master of horror of his time, Bierce writes twisted stories that make you believe in the genre. You can hear genius in his words. Writing in the late 19th century [(An Occurrence at Owl Creek Bridge (1890)] Bierce’s stories would later seem so contemporary, that without much change, they would show up as episodes of The Twilight Zone and other horror anthology television programs. Bierce is a must read. This collection is newer, but any collected works of his horror stories will do.

Do you think many writers are empaths?

Hope your ready for me @DesideriaMesa ... 15 minutes till LIVE on @WTBPodcast