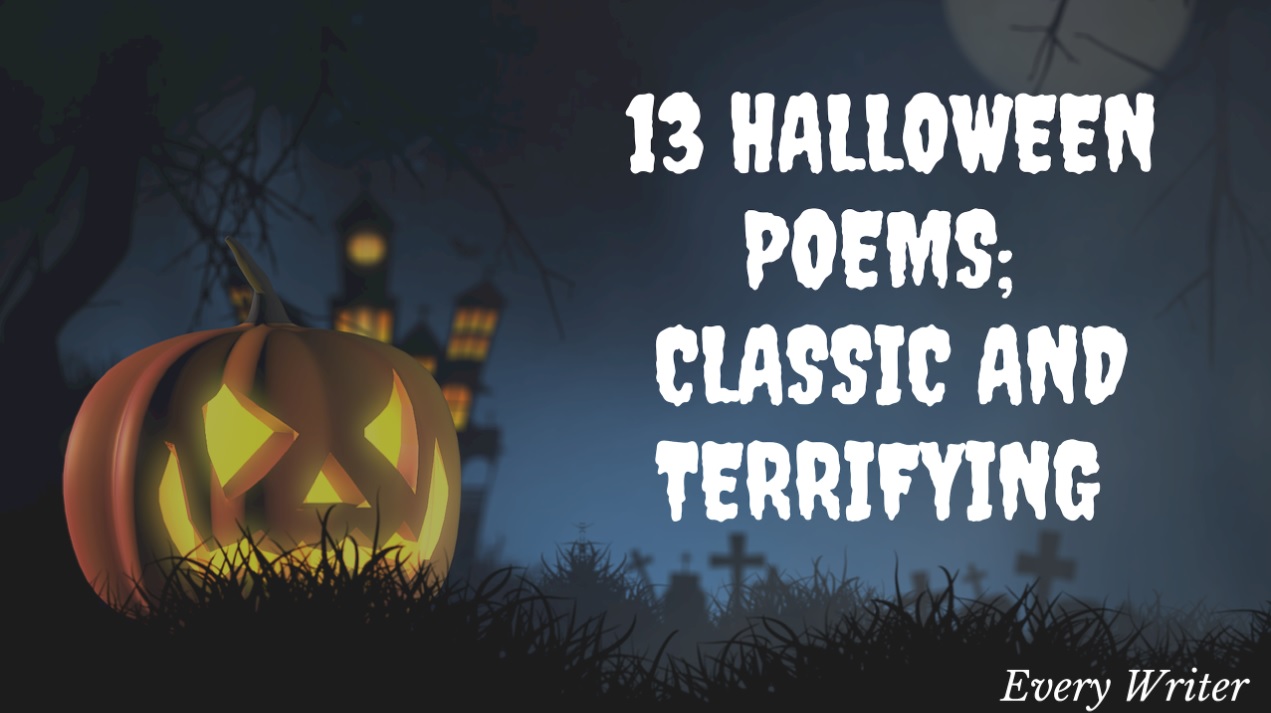 These poems are all “classic” poems, and they written by poets who have passed away. Many are scary, but all are generally appropriate ok for children. Generally scary poems or horror poems are difficult to come by, but we’ve collected 20 below that you just have to read.

The poems below are in no particular order. All are in the public domain. Let me just say that finding horror poems, makes me geek out completely.

I tried to make note of the best poems for children, and if I found a good recording or I’ve embedded it.

1. The Raven by Edgar Allan Poe

The Raven, if you know Poe at all, you know that he is a master of horror and of mood. This poem with repetition builds suspense and chills. You get the feeling that something is dead here with the narrator, but you are not sure what. A raven coming for a visit, after all, if not that scary, but the tone and mood of the poem are something unsurpassed in poetry.

You can read Poe’s The Raven on our poetry site.

This one’s creepy. Sassoon, as a war poet, is horrific, and this poem is no different. The poem is Evil Dead meets WWI. Suspense, mood, terror even, from a poem. You can read Haunted by Sassoon on Bartley.

3. A Child’s Nightmare by Robert Graves

This poem is chilling. It does give you the feeling of being a child being haunted by a nightmare creature. If you wake up with a dark figure standing over you, and the figure keeps coming back over and over again, then you know a little of what this poem presents to its readers. You can listen to the poem here below:

4. The Vampire by Conrad Aiken

Yes, a story is told about meeting a female Vampire, seductive and beautiful. You get all the elements of a vampire film through poetry. It is a LONG poem, so beware. Stanza:

What shape was this who came to us,
With basilisk eyes so ominous,
With mouth so sweet, so poisonous,
And tortured hands so pale?
We saw her wavering to and fro,
Through dark and wind we saw her go;
Yet what her name was did not know;
And felt our spirits fail.
Creepy eh? Meeting a vampire, creepy.

A wonderful little Ghost poem by Edna St. Vincent Millay, it’s creepy for sure, but what makes it most creepy is the feeling that you get to thing this is a real thing she saw. Over and over again in the poem you feel like this is a real retelling of something Millay experienced.

This is a fun poem. It’s exciting and creepy. One of the things that will stick out to you, is that it is an interesting story, woven into lyrics. Unlike some of the poems on this list, there is not a lot of repetition, but it is very rhythmic. You have to read.

This is of course taken from Macbeth, a creepy play in and of itself, but the song here, sung by Witches in the play, is mischievous, spell-like and fun for Halloween. If you’ve never given it a read, do it.

8. The Spider and the Fly: A Fable by Mary Howitt

Honestly, this is a terrific poem for children. It is a bit creepy, if you let yourself exist in the fly’s place. It’s a little fun with personification here. It’s a good read.

9. The Night Wind by Eugene Field

This is a perfect Halloween poem. It’s creepy. It’s fun, and it’s “The Night Before Christmas” of Halloween poetry. You should read it to your kids.

10. The Witch by Mary Elizabeth Coleridge

Another good poem for kids, but it has a sadness to it that is almost unexplained. It is about a witch, and it does have a touch of creepiness to it. This is one of my favorite scary poems. It’s a great, maybe the best, Halloween poem, and it’s great for kids. Listen below, and see what I mean.

A wonderful poem that is just creepy. Frost, as always, is a master of capturing mood. You have a faint feeling of dread when you read this poem, like so many other of Frost’s works. He is a master and a holiday list, any holiday collection of poem, without his name on it, would be a shame.

12. The Only Ghost I Ever Saw by Emily Dickinson

Are there any of Dickinson’s poems that are not downright creepy feeling? This one however, this one has a little more to it, especially if you know something about Emily. She was a shut in, of sorts, arguments are made about her social skill, but it’s generally accepted that she spend a lot of time alone. Was this a ghost she was seeing often? That’s creepy.

13. The Shadow on the Stone by Thomas Hardy

This is not a children’s poem, but it has a lot to offer lovers of horror poems. It is creepy, basically a ghost sighting at Stonehenge. A man feels his dead lover behind him, her shadow is cast upon a stone in front of him. He is both too afraid and too sad to turn around. That’s the gist of the poem, but of course Hardy does it justice.

We are look for more links and audio, that are good quality, as we find them, we will post them and make changes. Happy Halloween.