You are here: Home / Stories / Among the Cattails by Christopher Seiji Berardino 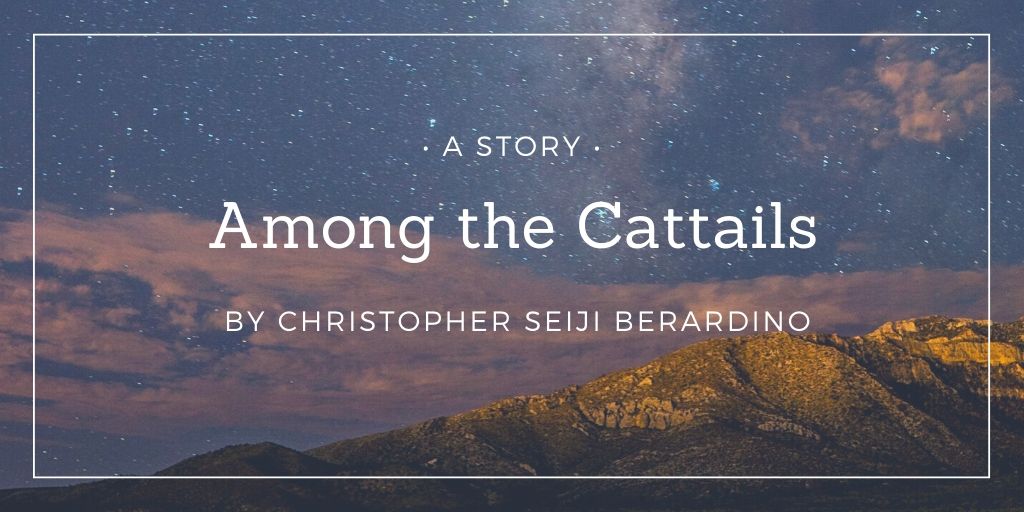 The searchlights from the guard towers were yet not lit, and in the blue of twilight, the garden looked like a tiny village. Bridges of desert wood crossed a shallow pond, connecting sandy peninsulas that stuck out into the water like rounded chins. A squat gazebo sat stoically above a thicket of cattails, standing careful guard over the many rows of watermelon, daikon, and lettuce.

The boy waited against the wall of his barrack, watching the sun’s dull skull sink slow below the distant mountains of California. As darkness fell across the camp, a bakeneko slithered in from beyond the razor wire. The boy readied his stolen canvas bag with shaking hands and crouched into the gloom of a moon-cast shadow.

The shape-shifter scratched, and picked, and bit the melons. It spilled in-between tangled vines and savagely ripped the waxy daikon from their roots. It shred the lettuce with soft cracks and rubbed its twisted back against the gazebo’s frame.

The boy waited until the bakaneko melted across the gravel path that lined the pond to where the birds nested among the cattails.

The boy moved barefoot towards the reeds. He would be like the ninja his grandfather told him about. Invisible. Merciless. A dealer in silent death. He stalked the bakeneko as it stalked the birds, tracing its steps until it stopped and reposed. The boy stood silent, holding his breath, stopping his heart. He tensed himself and coiled his body like a mechanical spring.

The bakeneko sniffed the air.

The boy jumped and caught the demon by the nape of its neck. It formed into flesh in his hands, growing legs, and fur, and ears, and a whipping tail. The boy stood and held it into the hazy glow of desert stars. Slimy melon seeds specked its amber fangs.

The boy quickly stuffed the shape-shifter into his sack and rushed to the pond. He dipped the bag into the water and tied-off the top. The sack jerked wildly. Pointed claws pressed into the side of the bag in tight random groups like scatter-shot, but the canvas was thick.

The boy held the bag as it slowed with exhaustion until, at last, it was still.

The boy made his way to the fence. The searchlight from the guard tower flipped on with a metallic pop. It followed its nightly course, flossing light in-between the rows and blocks.

The boy tossed the sack towards the base of the tower. It sailed high and quiet, its path outlined on the sand by tiny drops of water. The light pulled away from the barracks, spinning and whirling across the sand, blindly searching for the what had flown towards the wire. The boy stepped back, deeper and deeper into the dark. He watched as the searchlight stilled, a muddy iris for its yellow eye.

The boy, a demon killer, a ninja king, dissolved silently back into the night until all that remained was a muddy trail of footprints leading back to Block 2.

Christopher Seiji Berardino is a writer of Japanese-American descent from Orange County, CA. He received an MFA in Fiction from Cornell University in 2018. He has completed his first novel, Infamy, about the Japanese internment camps. His work has previously appeared in Flash Fiction, Blind Corner Literary Journal, The Copperfield Review, FLARE: The Flagler Review, and others.