You are here: Home / Classic Articles on Writing / Art and Nature in Poetry by Lord Byron 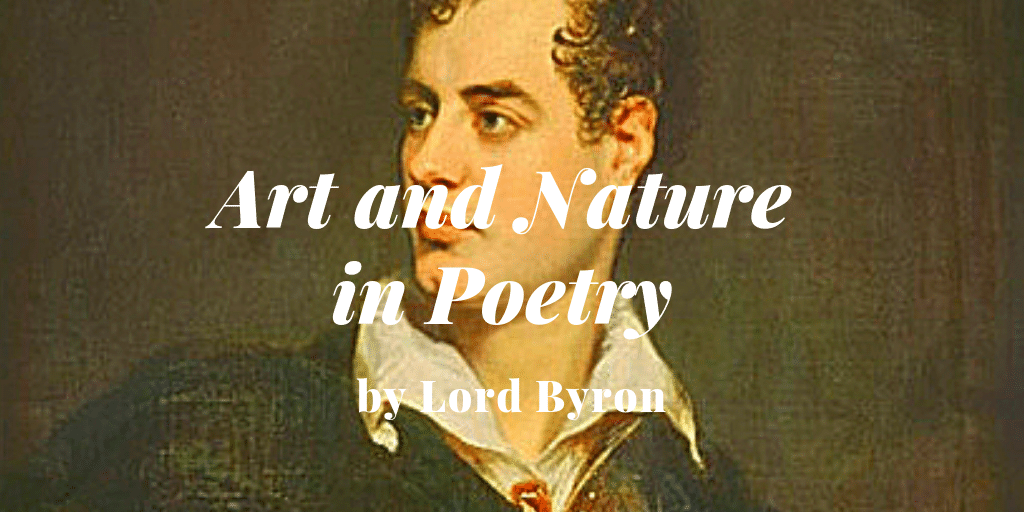 The beautiful but barren Hymettus—the whole coast of Attica, her hills and mountains, Pentelicus, Anchesmus, Philopappus, etc., etc.—are in themselves poetical, and would be so if the name of Athens, of Athenians, and her very ruins, were swept from the earth. But am I to be told that the “nature” of Attica would be more poetical without the “art” of the Acropolis? of the temple of Theseus? and of the still all Greek and glorious monuments of her exquisitely artificial genius? Ask the traveler what strikes him as most poetical—the Parthenon, or the rock on which it stands? The columns of Cape Colonna, or the cape itself? The rocks at the foot of it, or the recollection that Falconer’s ship was bulged upon them? There are a thousand rocks and capes far more picturesque than those of the Acropolis and Cape Sunium in themselves; what are they to a thousand scenes in the wilder parts of Greece, of Asia Minor, Switzerland, or even of Cintra in Portugal, or to many scenes of Italy, and the Sierras of Spain?

But it is the “art,” the columns, the temples, the wrecked vessels, which give them their antique and their modern poetry and not the spots themselves. Without them, the spots of earth would be unnoticed and unknown; buried, like Babylon and Nineveh, in indistinct confusion, without poetry, as without existence; but to whatever spot of earth these ruins were transported, if they were capable of transportation, like the obelisk, and the sphinx, and Memnon’s head, there they would still exist in the perfection of their beauty, and in the pride of their poetry. I opposed, and will ever oppose, the robbery of ruins from Athens to instruct the English in sculpture; but why did I do so? The ruins are as poetical in Piccadilly as they were in the Parthenon; but the Parthenon and its rock are less so without them. Such is the poetry of art.

Mr. Bowles contends again that the pyramids of Egypt are poetical because of “the association with boundless deserts,” and that a “pyramid of the same dimensions” would not be sublime in “Lincoln’s-Inn-Fields”: not so poetical certainly; but take away the “pyramids,” and what is the “desert”? Take away Stonehenge from Salisbury Plain, and it is nothing more than Hounslow Heath, or any other uninclosed down. It appears to me that St. Peter’s the Coliseum, the Pantheon, the Palatine, the Apollo, the Laocoon, the Venus dei Medici, the Hercules, the Dying Gladiator, the Moses of Michelangelo, and all the higher works of Canova (I have already spoken of those of ancient Greece, still extant in that country, or transported to England), are as poetical as Mont Blanc, or Mount Ætna, perhaps still more so, as they are direct manifestations of mind, and presuppose poetry in their very conception; and have, moreover, as being such, a something of actual life, which can not belong to any part of inanimate nature—unless we adopt the system of Spinoza, that the world is the Deity. There can be nothing more poetical in its aspect than the city of Venice; does this depend upon the sea, or the canals?

Is it the canal which runs between the palace and the prison, or the Bridge of Sighs, which connects them, that renders it poetical? Is it the Canal Grande, or the Rialto which arches it, the churches which tower over it, the palaces which line, and the gondolas which glide over, the waters, that render this city more poetical than Rome itself? Mr. Bowles will say, perhaps, that the Rialto is but marble, the palaces and churches are only stone, and the gondolas a “coarse” black cloth thrown over some planks of carved wood, with a shining bit of fantastically formed iron at the prow, “without” the water. And I tell him that, without these, the water would be nothing but a clay-colored ditch; and whoever says the contrary deserves to be at the bottom of that where Pope’s heroes are embraced by the mud nymphs. There would be nothing to make the canal of Venice more poetical than that of Paddington, were it not for the artificial adjuncts above mentioned, altho it is a perfectly natural canal, formed by the sea and the innumerable islands which constitute the site of this extraordinary city.

The very Cloaca of Tarquin at Rome are as poetical as Richmond Hill; many will think so: take away Rome and leave the Tiber and the seven hills in the nature of Evander’s time. Let Mr. Bowles, or Mr. Wordsworth, or Mr. Southey, or any of the other “naturals,” make a poem upon them, and then see which is most poetical—their production, or the commonest guide-book which tells you the road from St. Peter’s to the Coliseum, and informs you what you will see by the way. The ground interests in Virgil, because it will be Rome, and not because it is Evander’s rural domain.

Mr. Bowles then proceeds to press Homer into his service in answer to a remark of Mr. Campbell’s, that “Homer was a great describer of works of art.” Mr. Bowles contends that all his great power, even in this, depends upon their connection with nature. The “shield of Achilles derives its poetical interest from the subjects described on it.” And from what does the spear of Achilles derive its interest? and the helmet and the mail worn by Patroclus, and the celestial armor, and the very brazen greaves of the well-booted Greeks? Is it solely from the legs, and the back, and the breast, and the human body, which they enclose? In that case it would have been more poetical to have made them fight naked; and Gully and Gregson, as being nearer to a state of nature are more poetical boxing in a pair of drawers, than Hector and Achilles in radiant armor and with heroic weapons.

Instead of the clash of helmets, and the rushing of chariots, and the whizzing of spears, and the glancing of swords, and the cleaving of shields, and the piercing of breastplates, why not represent the Greeks and Trojans like two savage tribes, tugging and tearing, and kicking and biting, and gnashing, foaming, grinning, and gouging, in all the poetry of martial nature, unencumbered with gross, prosaic, artificial arms; an equal superfluity to the natural warrior and his natural poet? Is there anything unpoetical in Ulysses striking the horses of Rhesus with his bow (having forgotten his thong), or would Mr. Bowles have had him kick them with his foot, or smack them with his hand, as being more unsophisticated?

In Gray’s “Elegy” is there an image more striking than his “shapeless sculpture”? Of sculpture in general, it may be observed that it is more poetical than nature itself, inasmuch as it represents and bodies forth that ideal beauty and sublimity which is never to be found in actual nature. This, at least, is the general opinion. But, always excepting the Venus dei Medici, I differ from that opinion, at least as far as regards female beauty; for the head of Lady Claremont (when I first saw her nine years ago) seemed to possess all that sculpture could require for its ideal. I recollect seeing something of the same kind in the head of an Albanian girl, who was actually employed in mending a road in the mountains, and in some Greek, and one or two Italian faces. But of sublimity I have never seen anything in human nature at all to approach the expression of sculpture, either in the Apollo, in the Moses, or other of the sterner works of ancient or modern art.

Let us examine a little further this “babble of green fields” and of bare nature in general as superior to artificial imagery, for the poetical purposes of the fine arts. In landscape painting the great artist does not give you a literal copy of a country, but he invents and composes one. Nature, in her natural aspect, does not furnish him with such existing scenes as he requires. Everywhere he presents you with some famous city, or celebrated scene from mountain or other nature; it must be taken from some particular point of view, and with such light, and shade, and distance, etc., as serve not only to heighten its beauties, but to shadow its deformities. The poetry of nature alone, exactly as she appears, is not sufficient to bear him out. The very sky of his painting is not the portrait of the sky of nature; it is a composition of different skies, observed at different times, and not the whole copied from any particular day. And why? Because nature is not lavish of her beauties; they are widely scattered and occasionally displayed, to be selected with care and gathered with difficulty….

Art is not inferior to nature for poetical purposes. What makes a regiment of soldiers a more noble object of view than the same mass of mob? Their arms, their dresses, their banners, and the art and artificial symmetry of their position and movements. A Highlander’s plaid, a Mussulman’s turban, and a Roman toga are more poetical than the tattooed or untattooed New Sandwich savages, altho they were described by William Wordsworth himself like the “idiot in his glory.”

I have seen as many mountains as most men, and more fleets than the generality of landsmen; and, to my mind, a large convoy with a few sail of the line to conduct them is as noble and as poetical a prospect as all that inanimate nature can produce. I prefer the “mast of some great admiral,” with all its tackle, to the Scotch fir or the Alpine tarnen, and think that more poetry has been made out of it. In what does the infinite superiority of Falconer’s “Shipwreck” over all other shipwrecks consist? In his admirable application of the terms of his art; in a poet sailor’s description of the sailor’s fate. These very terms, by his application, make the strength and reality of his poem. Why? because he was a poet, and in the hands of a poet art will not be found less ornamental than nature. It is precisely in general nature, and in stepping out of his element, that Falconer fails; where he digresses to speak of ancient Greece, and “such branches of learning.”