You are here: Home / Featured / 10 Greatest Classic Horror Stories of all Time 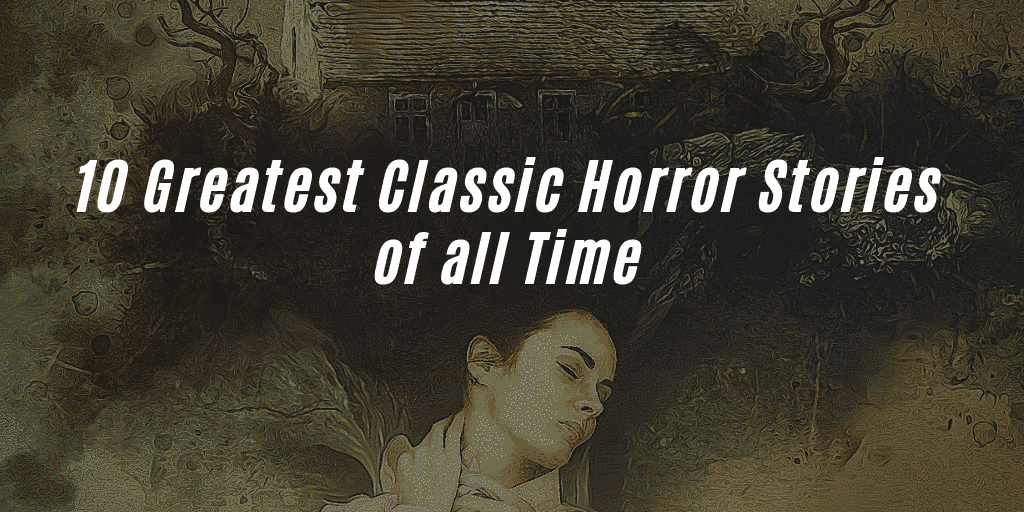 When looking at the Greatest Classic Horror Stories of all time we are defining classic here as “anything that has not been published in contemporary times.” I’m not defining contemporary times in any strict way here. I would say the author needs to be dead, or it has to be before WWI, but I’m not going to do that. We know that Stephen King is contemporary. I’m sure his work will be classic someday, but for now we are going with authors who have passed away or who were not writing in contemporary times. These are not in any order.

Also, if you want to argue with me, just leave a comment. I will respond. If you think I missed a classic story, let me know.

Famed in cartoon and after-school specials, The Legend of Sleepy Hollow is one of those chilling stories that you cannot put down. It might be the matter of fact tone that Irving takes in his writing. It seems so unreal and real at the same time. The story has impacted our culture so much that every in town, city and village across this country, we have a story about a headless figure that haunts the night. Now they ride motorcycles instead of horses. People still fear the headless rider. Read the Story

A twisting story of reward and regret. The idea behind The Monkey’s Paw is unnerving, creepy and the ending is shocking. Hollywood wishes it could do so well to evoke feelings in its viewers. The first time I read The Monkey’s Paw, it was a rainy night. I was 12. I sat by the window of my bedroom, as I read I moved away from the dark window and into the light of the living room. Something about this story, doesn’t want you to read it alone, like the best of the best horror stories. The ending, the final terror, taking place off the page. You couldn’t ask for more in a horror story.

To this day (after 1st reading this story over 20 years ago) I STILL want to know why. Why, why does he wear the veil? Another part of me, doesn’t want to know. You become afraid of it as you read, and seeing under it, to me, was completely out of the question. I would like to know why, but I don’t want to know what. The Minister’s Black Veil is one of those old horror stories that make you know what horror is all about.

This story is still relevant. From the swine flu to the latest outbreak of Ebola, it is still so scary! I could have picked many of Poe’s stories, but this one, to me, it’s darkness, it’s revenge, it’s realistic possibilities, scares me the most. Even though it was written a 150 years ago, the ideas in this story are still very contemporary.

Man this story is one of my favorites. It not only puts the horror in death, it takes the hero and luck out of life. You want hope? There isn’t any in this story, and it will keep you awake at night thinking about, maybe, just maybe, what your last few moments on earth will be like. What could terrify us more than false hope from death?

Would you sell your soul for money? People have been asking this questions, I’m sure, for 1000s of years, and this story illustrates the difficulty with answering the questions. The young man might, but the old man thinks much much harder. It’s a classic dilemma that is at the heart of this life and the next. The story is so different, so odd to be written so long ago, it would make an awesome modern day horror film.

An oxymoron to say the least. The story is creepy and chilling even with all our knowledge of Dracula. After bunches of movies and modern day vampires, this story still manages to be scary.xxx

The first vampire story. It pre-dates Stoker’s novel by almost 80 years. It is also creepy and scary, and to think of it being written so early in the 1800s makes it even creepier. I’m not sure why. It is a must read for vampire lovers.

The Mummy, Dracula, zombies, Wolfman, aliens, are enduring horror monsters, but they are based on legend. I’m not saying writing tales about these monsters is easy, but you have a sort of template to go off. You know that oral tradition tells of them. Now, sit down and try to come up with a lasting horror monster that will stand the test of time and that you just pull off the top of your head. It’s very difficult. Frankenstein, might be one example. Cthulhu is the other. The story and the monster have stood the test of time, and they are still scary. Every die hard horror writer loves this story.

Creepy Angels? Yep. The story was mistakenly printed as being true in the newspaper, and for 100 years after officials and media like the BBC have had to tell people that this story really did not happen. It has that feel to it though, and the documentary nature adds to the horror.